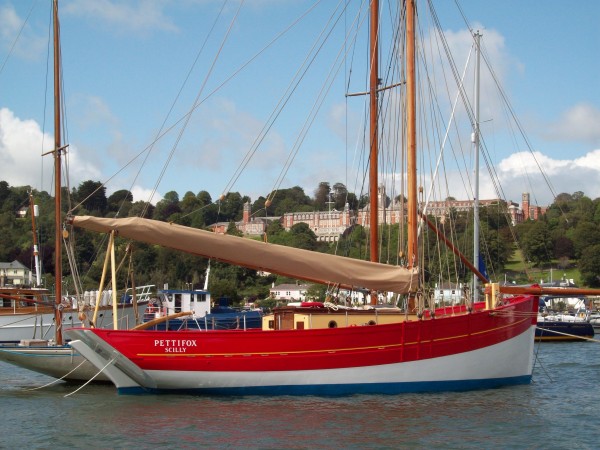 Last Thursday saw the relaunch of ‘Pettifox’ which is now owned by John and Flick Moody of John Moody Marine Timber.  They have been working incredibly hard on her at Baltic Wharf boatyard since they purchased her and she really does look a million dollars, putting lots of other boats on the river to shame!

‘Pettifox’ was built in 1992 by Peter Martin on the Isles of Scilly to a design by Frenchman Francoise Vivier.  Vivier’s boats have become well known in Brittany with strong influences from the traditional working and fishing boats that have been built there for many years.  She has that typical high bow, lovely sweeping sheer line going aft to the raked transom that falls to a very deep heel with a sharp rise on the keel going forward to a fairly shallow forefoot.  These characterisitics made the French boats very seaworthy and dry but also very fast as they sailed on the beautiful planking run going aft and the deep heel.  Although she has a gaff cutter rig and not the traditional French lug, I think she will still give the working boats over there a run for their money!

Faced with a cavernous empty hull when they bought her, John has been fitting the interior out to give a twin forecabin, several bunks aft under the deckhead and a spacious saloon with galley and a heads compartment off to starboard.  The rigging has all been replaced with Lee Rogers of Dartmouth making the new shrouds and leather work.  The topsides have been finished in the orignal colour scheme that many people will know the boat for and really make her stand out in a crowd.  All in all she looks absolutely stunning and is a first class little boat, so a big congratulations to the whole Moody family for getting her to this stage, now they can look forward to spending the rest of the season cruising locally from Dartmouth and enjoying whats left of the English summer!

Today has also seen the completion of the sale of ‘Blazing Star’ the 55′ John Alden Yawl from Helford.  She will be taken to Belguim by her new owners before the winter where they plan to finish the refit and get her back in comission for the 2013 season.