Busy week at the brokerage 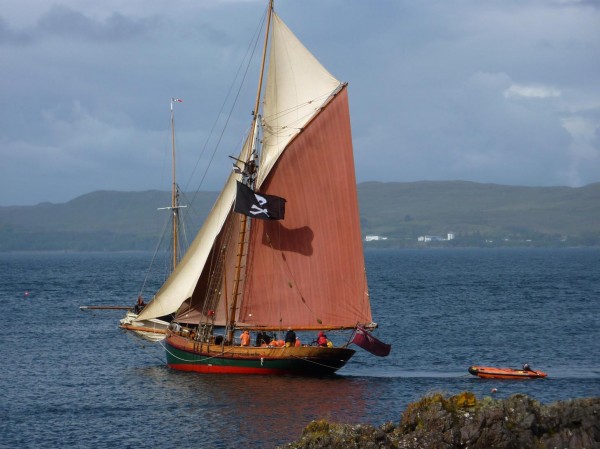 We have had a busy couple of weeks here with several sold boats moving around the country to new owners and lots of boats coming on the market that need viewing.

Last week saw Eda Frandsen, the 53′ Danish gaff cutter move from the wilds of West Scotland to her new base in Cornwall.  Jamie and Penny, who have run the very successful charter business Eda Frandsen Sailing for over 16 years now, have hung up their oil skins and are moving on to different activities.  The boat has been bought by experienced charter skipper James Mackenzie and his girlfriend Becky who will carry on taking guests sailing on the west coast of Scotland and South West England.  It was not ideal weather for their first voyage as new owners, being forced to put up the trisail after a day at sea!  James was almost shocked at how well she dealt with the weather and could hardly believe that after a real hammering there was not one drop of water in the bilge!  This is a testament not only to the design but also to Jamie’s skills as he rebuilt her and has maintained her himself.

Peter has been travelling around the south west a lot in the last 10 days with 2 trips to Falmouth and 2 trips down to Plymouth, trying to convert some potential wooden boat owners and inspire them to buy wood rather than plastic!  It was interesting going to Southampton Boatshow 2 weeks ago and seeing mile after mile of white tupperware  with only the varnished topmast of Will Stirling’s ‘Integrity’ to break the monotony!  It is a real shame that members of the general ‘boat buying’ public cannot be persuaded to go wood. There are obvious benefits to a lot of these modern boats, mainly in terms of usable space.  A new 40′ production will likely have 3 double cabins, 2 heads and a cockpit where 6/8 people can sit in comfort.  However, if the buyers of these boats ever took them to sea, they will find that they rattle around inside the cabin with no hand holds, can’t move around the cockpit because the table is in the way and the wheel is too big, and when they are beating to windward the thing slams like a baked bean can.  It does appear that generally, but certainly not exclusively, sailing performance and practicality are not at the top of the wish list on the designers drawing board, as boats sell on more than their capabilities at sea.  You only have to look at an average marina on the south coast to see that 90% of the boats rarely leave their berth, and then it is only when the weather is perfect.  A very good friend of mine used to work for a Dufour broker and she once had a couple who spent months looking at the range of yachts and what was available.  When at last they had decided which model it was they wanted, they were offered a sea trial to put the boat through it’s paces, to which they replied “No thank you, it’s quite alright, we don’t intend to sail the boat, its simply a cheap cottage in the West Country”!!!  These people cannot be serious?

As everyone who has sailed a good wooden boat knows, the seakeeping is a fine quality that is hard to convey to the unconverted, but makes an enormous difference to the comfort and peace of mind, especially on a longer passage.  The other argument that is always brought up when weighing up the pro’s and con’s of wooden boats is maintenance.  The fact is that many wooden boat owners enjoy the  maintenance side, and revel in the few weeks every year spent in the boat yard alongside all the other nutters.  As we have said many times in the past, some boats are just nautical garden sheds!  That aside, many of the horror stories of wooden boat maintenance come from people who have no idea what they are doing and buy totally the wrong boat.  If you buy a good boat, keeping it good is relatively easy and just requires small amounts of regular and preventative maintenance.  If you buy a bad one, and there are many of these out there, don’t complain to the world when it costs you a fortune, you spend your whole life in the yard and never go sailing!

The last factor to consider is that of depreciation.  If Joe Blogs goes and buys a new plastic yacht for £120,000, what price is he going to sell it for 4 years later?  Is this depreciation more or less than the cost of 4 years maintenance on a good wooden yacht.  Take for example the 43′ Camper and Nicholson cruiser racer we have for sale.  That boat could be bought for £55,000, and in 4 years time will be worth at least that, if not more!!  Less than half the purchase price with no depreciation!  Surely the maths lay a great argument for buying a wooden boat, and I know I would far rather go to sea in the Campers ex race yacht than a new ‘Benetaria’ ice cream tub!

I am part way through the delivery of Angele Aline, the 55′ historic French fishing trawler, now rigged as a gaff cutter, that we sold a few weeks ago.  The boat was in Ipswich where I joined the owner to give him some support and words of advice on the trip round.  We set off down the Orwell and had a rough trip across the Thames before getting into Eastbourne for some much needed rest.  We left here early the next morning and had a fast run down to Lymington under staysail and jib with 35-40 knots up our chuff.  This is just the sort of day a new owner needs to give him some confidence in his new boat!  Even though her trim is a bit wrong and she is down a little at the stern, she ploughed on admirably through a horrible sea, with only a couple of rogue waves dumping over the counter onto the aft deck!  With the wood burner roaring, we then spent 2 days hiding in Lymington from a brisk westerly which gave us a chance to fix the various leaks in the coachroof and pilot house that threatened to turn our charts into a soggy mess, tighten up the rigging and resolve a whole host of other little problems that you will always find in a new boat.  As soon as the wind had eased we set off and made good time straight back to Dartmouth where we have left the boat for a week or so.  The next stage is to take her from here to Gloucester where Tommi Neilsen will be doing a big refit this winter, including a reverting her back to the ketch rig and repairing a bit of soft in the counter.  We plan to leave here Sunday, make the most of SE breeze and dash down to Newlyn, where we will wait for the tides and catch 8 hours of favourable current around Lands End and up the north coats of Cornwall into the Bristol Channel.

The next delivery trip which i am very much looking forward to will be to take the 37′ Buchanan ‘Shiraz’ to Germany for her new owners.  I aim to leave later next week and have a fast 3/4 day passage up the channel with a good SW breeze.  Sods law of the sea says it will turn easterly but that’s a problem for another day!