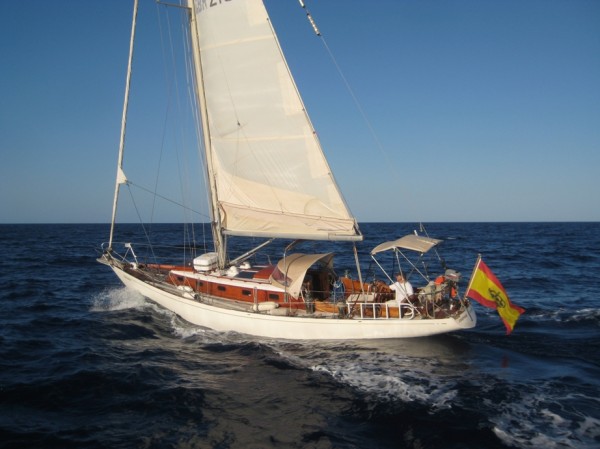 There is a lot of interest in rebuilding wooden yachts, especially in these tough times when lumps sums of capital to buy is in short supply but significant payments can be made out of income thus spreading the cost.
We are also seeing once again a desire to buy cheap and refit rather than buy sound and complete in the first place. 35 years ago when I started Wooden Ships plastic was all the rage and wood dropped off the radar as being simply old fashioned and out of date. The incredibly quick change from wood to plastic over just 3 or 4 seasons must be taken in conjunction with other socio-economic changes at the time. Motor cars, once a major investment and life-changing purchase had become disposable items, new towns like Welwyn Garden City and Harlow were well established and growing, super-markets, ready meals, social mobility, everything we regard as normal had only recently been firmly established and suddenly it was the turn of sports, especially expensive sports like yachting.

There was money and there was spare time and this quick, easy way of building yachts arrived at just the right time.

Building with long established and slow-learnt skills for a life-time of use was no longer a priority. What mattered was today and the quick production grp boat provided this in people’s perspective. They could be produced quickly and cheaply, they required far more limited skills than traditionally built boats and there was a decent profit margin. But more important, designs and styles could be changed quickly so fashion became a major component and has remained so.

People are more likely to change their boats these days not because they are worn out but because they are unfashionable in exactly the same way as many people buy their cars – a good theory when there is plenty of money and to spare. However come hard times and it all slows up a bit as most developed countries have discovered in the last few years.

When we started this business 35 years ago a 1960’s yacht was almost a new boat but just 10 years later in the 1970’s the same boat was regarded as old hat just as a 10 year old plastic boat now is considered an old boat.

Many traditional yachts – but not all by any means – are enduring designs, the general appearance has become classic in the truest sense of the word, they have features which date them but do not date.

They also last a surprisingly long time and most important in this tough economic climate they are open to repair and maintenance by owners with fairly limited skills and abilities while repairs to any other form of construction require hi-tech facilities and materials that the average owner just does not have.

The major decision of course is at what stage does a repair move from being a DIY handyman job to being work for the professional?

An older generation of yachtsman will recall a wonderful camaraderie in boatyards all round the country. Yachts were laid up at the same time, hours were spent in the winter pottering around on  boats, knowledge, equipment and materials were shared, owners were encouraged by others in their moments of despondency and there were some great parties before all the boats went back into the water and dispersed for the summer.

It’s all gone. Even modern grp yachts need constant maintenance if they are to look good and perform well but they will survive unloved for longish periods provided an owner accepts that at the end there will be a big reckoning. This is usually avoided by selling and buying a newer shinier boat, just as we do with our motor cars.

Nobody works on their own grp boats because by and large they can’t. The material does not allow for any significant amateur work but that does not matter because the trend over the past 20 years is that owners are cash rich, time poor and they can pay others to do the work for them.

Of course it all makes work for the working man to do but as yachting folk, have we not lost something?