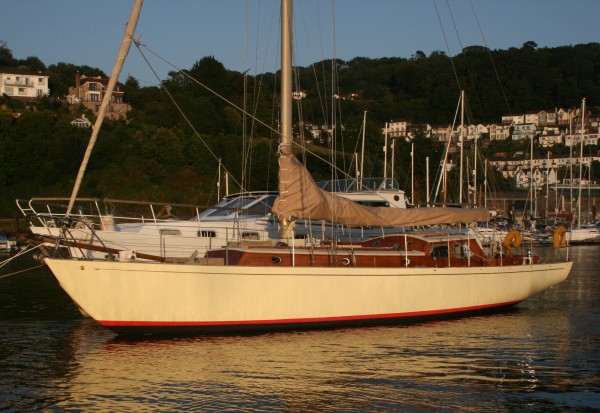 This weekend, 6/7th July, saw the start of the Dartmouth Classic Channel Regatta, with two days of racing outside the harbour.  We were there aboard our 43′ Camper and Nicholson ‘Zircon’, fresh from a 2 week refit and looking very smart.  We had high hopes that the quality of th boat would make up for our lack of sharp racing skills, however it was not to be!  Saturday brought very light winds which made the beat to the windward mark long and tiresome in the strong tide.  It was clear not long after the start that the course would be shortened from the original 4 laps, and as it was very few boats even managed to complete 2 before the end of the afternoon.  Our maximum boat speed during the race was a heady 3.1 knots which was greeted with utter delight and a celebratory beer.  It was however perfect conditions to get our spinnaker and asymmetric out their bags for the first time, both of which set very well.

The whole fleet was shown up by the grace and speed of Jolie Brise, a Le Harve pilot cutter and winner of the first Fastnet Race.  It was astounding how she kept moving when everyone else seemed to be struggling, however I think she was benefiting from a breeze slightly above sea level which she could benefit from with her tall mast and enormous gaff topsail.  It just goes to show that you don’t necessarily need a strong breeze to get a heavy gaff cutter to go well.

Sunday promised a bit more breeze and it certainly delivered with a steady north easterly Force 3-4 at the start.  More by luck than skill, we managed to judge the start perfectly and went across the line in second place, doing 7.2 knots and soon flying into first place and keeping that position for at least half an hour!  Unfortunately our old sails are not conducive for beating hard to windward and although out in front we were losing ground to leeward.  We were however delighted to have made a good start and be at the forward end of the fleet having never sailed the boat hard or really pushed her at all.  There were several French competitors going very well, with the ex racing yacht Cervantes romping through and being one of 3 boats to actually finish the course by the end of the day.  The wind started to fade as we headed along the coast towards Torbay and shortly after Berry head it died completely with all the bats started to spin in circles in the tide and head smartly back towards Dartmouth.  Only three boats that I know of made it to the mark and were then able to drift slowly back to the finish, most boats retiring and enjoying lunch in the sun or catching mackerel.  It was good to see the two Holman sloops Mabel and Whirlaway back together, with Bruce Thorogood in Mabel slicing past us to windward in the light winds.

Despite the lack of wind it was a great weekend with a good turn out of yachts from both sides of the channel.  Monday will see the fleet depart on a cross channel race to Paimpol, then up to the Channel Islands at the end of the week. The winds are looking great for this with 15-20 knots on the beam going across the channel, so all the boats will be flying with the sheets eased out a little.

We will be putting photos from the weekend up on our Facebook page, but there are lots of photos taken by Andy Carter of Dartmouth Photography on their web site, www.dartmouthphotography.com