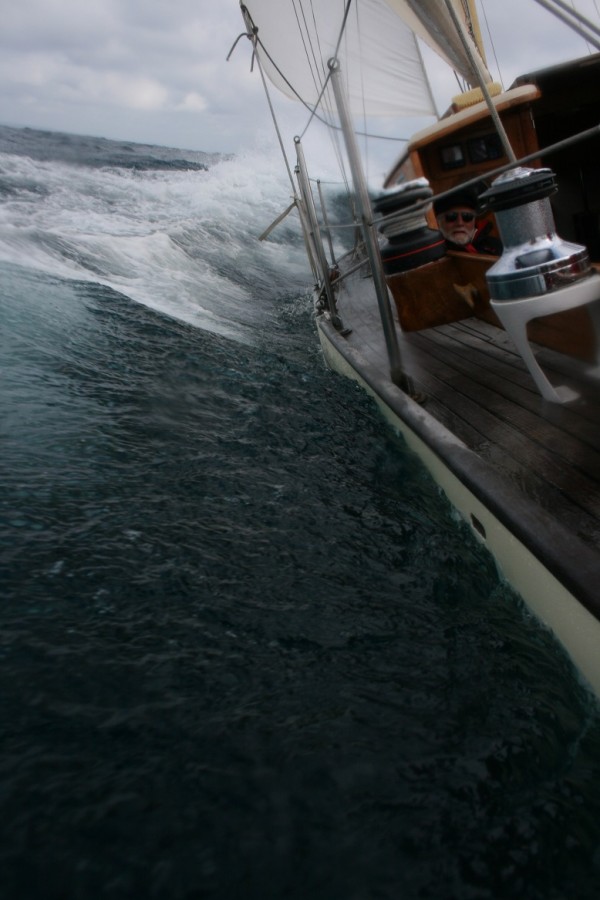 It has been a busy summer for us here, with the weather playing a large part I am sure.  Our purchase of a new boat last winter rather put the pressure on to get her ready for the summer season and take part in some of the fantastic Classic yacht regattas we have on the south coast.

Several weeks of stripping and varninshing in the early opart of the season and 2 weeks of hard work in the yard saw our C&N Zircon looking very smart and ready to go racing.  The Dartmouth Crab regatta was the first stop and with a great turn out of yachts and a very relaxed but well organised programme, it was a great few days of sailing and partying.  Unfortunately our racing skills didn’t quite match our expectations and we found ourselves making tea ½ mile downwind of the start line when the 5 minute gun went!  Sunday was a little more successful, but the sun made up for everything despite the poor results!

The cross channel race to Paimpol was mixed affair and not particularly successful, but we were just happy to get a new and unknown boat across in one piece without any damage.  Our early departure from the regatta due to the office and emails needing attention saw us beat back to Dartmouth in a F6-7 in 16 hours, giving the boat a real test and proving to us the design office at Camper and Nicholson at that time really knew their stuff.  Close hauled and hard pressed in a decent sea with one finger on the helm can’t be bad!

Plymouth Classics followed not long after for us and was again a great event.  Leaning more to the traditional rather than classic boats, Sutton Harbour was a great sight for the weekend.  Saturday saw some superb racing around the sound with a very well laid course making the most of the bouncy conditions.  Unfortunately not everyone decided to venture into the breeze, but there was a healthy turn out and surely a great sight from the shore.  The pilot cutter Cornubia was storming around in all her splendour, while a great swathe of small gaff cutters braved the elements and had some good competitive racing.  Our boat was revelling in the conditions with full sail and side decks under making a steady 8 knots.  It is days like that makes the time in the boat yard seem very worthwhile!  Let’s hope the Plymouth classics next year can draw as many boats, if not more, as it is a superb setting with one the best sailing playgrounds out in the Sound in which to race.  For details see their web site www.plymouthclassics.org.uk 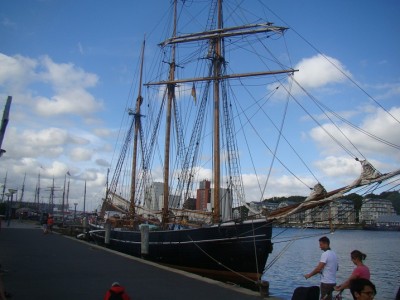 With the summer heat producing a lot of activity in the business, we have recently recruited another family member to help man the phones while peter and Richard are away looking at boats.  Pam, Richards mother, is now a part time member of Wooden Ships, taking up in the same roll where she left off about 30 years ago!  It is good timing for Pam to be joining us again as Richard is currently spending 3 weeks in the Baltic skippering a ship he has spent a lot of time aboard, the 110’ 3 mast topgallant schooner Activ.  Richard has sailed about 60,000Nm on Activ over the years, including a 6 month voyage to uncharted areas of North East Greenland in 2011 which is the subject for another blog!  Richard is taking over from the regular skipper so he can concentrate on preparations for the next expedition, a circumnavigation of the North Pole via the North East and North West passages.  Activ is a Baltic Trader, originally built ice class to trade between Denmark and Greenland, so she is no stranger to northern climes and has the strength to cope with a little ice breaking! She is now a privately owned ship and has undertaken two Arctic expeditions in recent years with an emphasis on scientific research in areas that are very inaccessible.  They will be cruising in the southern Baltic Sea for a few weeks so no doubt more pictures and stories will follow.

As soon as Richard is home, Peter will be able to spend a little more time on his 1939 Vertue which is nearing the end of a period of work including an interior refit, deck repairs, new top to the stem and a burn off and repaint.  After suffering a little in the summer sun, it is time to get her in the water and enjoy some Autumn sailing!