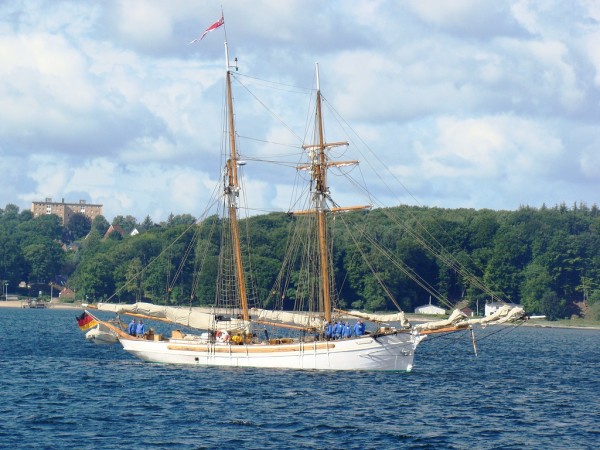 For the last few weeks I have been skippering the top gallant schooner Activ in the southern Baltic, and as always over here, have been treated to a delightful fleet of traditional boats in both Germany and Denmark.  They do not have so many yachts as we have in UK, but they have a bigger fleet of traditional boats in the form of rebuilt and converted fishing boats and cargo boats.

The Danes produced many thousands of fishing boats, usually built of oak on oak, and mostly with their signature elliptical counter stern that is so exquisitely beautiful.  As in UK, many of these boats were broken up on the beaches when the EU changed the fishing rules, but many survived and are sailing today as either charter boats or private yachts.  I came across one in Flensburg last week that is as close to yacht finish as I have ever seen a working boat.  She is about 60’ on deck and rigged as a two mast topsail schooner with steeply raked masts in the American fashion.  She is called Lena and is quite simply superb!  If I had the money………….but we have enough old boats already!

There are so many traditional boats here that a day out sailing is a feast for the afflicted, and not only small boats, 2 days ago while sailing to Marstal we passed a 90’ schooner ghosting along in the light breeze, a 60’ fishing ketch which would be the Baltic equivalent to a Brixham trawler, then two other brigantines of about 80’.  There is also of whole host of smaller Colin Archer types and lots of converted fishing smacks in the 30-40’ size.  Of course Activ is the jewel in the crown with her towering 3 masts and 140’ overall, but I would say that because I am a little biased!

We stopped in Marstal on the island of Aero for a day which is a great little place.  Despite the fact that it is surrounded by shallow banks and the entrance is up a narrow dredged channel, this was the second biggest port in Denmark to Copenhagen at one point, and the town boast a huge number of ship yards all building the ‘Marstal Schooners’ which were traditional Baltic Trader designs that traded all over the north Atlantic.  The yards here were prolific and the ship building heritage is still obvious as you walk around the harbour.  Not only is it the home to Denmark’s sea training school, but they have kept alive the skills of the shipwrights and have an active and expanding boat yard capable of working on dinghies and 100’ ships.  Last year saw the Launch of Beuna Vista, a well known Marstal schooner that needed a complete rebuild.  It was bought by the town, put on the slip and rebuilt form the bottom up so now there is virtually none of the original boat left.  They are waiting for funding to fit her out, put in a rig and engine and then it is planned to take her to Nova Scotia where she used to trade salt cod.  Not content with one enormous boat, they decided that while there was loads of timber lying around and they had the plans, they would start building another one to the same lines.  The keel was laid last year and the stem and stern posts are up with about a dozen pairs of frames, and another 15 pairs lying on the ground ready to be hoisted into place.  The work is being done by volunteers who live in the town, and whenever anyone feels like spending some time in the workshop they loft up some more frames and fit them in.  There are so many skilled shipwrights on the island that this way of working does not seem to be a problem, and there is no rush to finish the project so why not!  I could not imagine laying an 18” square oak keel for a 90’ ship on the quay in Dartmouth and asking the locals to build a boat!  It is the unfortunate sign that we no longer have a great supply those skills in most parts of England, plus the town council would never have the imagination to allow something like that to happen!

The great problem as always with these boats is not building or rebuilding it, it is finding a purpose for her once she has been launched, a reason for the ship to be at sea and be looked after year after year.  We do not have enough people around like the owner of Activ who have the money and desire to own a big traditional ship, however if we could change the mind set of some of the super yacht owners we would see far more traditional boats from many countries out sailing again.  In England we now only have 4 big traditional cargo ships left, or Westcountry trading ships as they are known, out of the many hundreds or thousands that were built.  Bessie Ellen is a superb example, built in 1904 and working hard as a charter boat.  The Irene is sailing again after a catastrophic fire and major rebuild, The Kathleen and May is surviving, and the poor Garlandstone, a beautiful little ship, is lying in a mud berth up the Tamar and is desperate for someone to get her sailing and breath some life into her again.  It is such a shame that we cannot make some of the very wealthy boat owners who swan around the Med and Caribbean see the beauty and history in these ships, and give them the imagination to see something more than a rotting old wooden hulk.  I guarantee if we sailed in St Tropez in Activ, every single person there would stop and stare and want to come and see this beautiful ship!  At least she would be something a little different to lines of modern super yachts, that despite their price tag, all look surprisingly similar!

With the amount of traditional and classic boats in Danish and German waters, we have decided to team up with the yard in Marstal and they will now be working as our Scandinavian agents.  The owner of the yard is young woman from the island, Monica Fabricius, who’s family have a long history with shipping and ship building.  She finished her training as a shipwright last year and has taken the bold step to buy the yard and make a go of it.  They are doing very well and have plenty of business, helped by the fact that Marstal is one of the traditional boating centres of Denmark, and they are the obvious choice for us when thinking about branching out into that area.  They have undercover storage for a huge number of boats with skilled workmen on sight and a sail loft.  It is hoped that this will become the place to go if you wish to sell a boat in Denmark, southern Sweden or northern Germany, and similarly a base that will have a collective of boats for potential buyers.  It is also a lovely place just to visit if you happen to like looking at nice boats!