Without doubt she’s a Classic!

In the last 6 months we have had several owners approach us with boats they wish to sell that are a little out of our comfort zone and do not quite fit our normal remit.  The issue for us with these few boats is that they are fibreglass, and being solely brokers of wooden yachts for over 35 years means that taking on a fibreglass yacht is a big step.

When Peter first started Wooden Ships, many of the yachts we were selling were relatively new, but the era of fibreglass had arrived and everybody wanted a yacht in the new material.  Fibreglass was expensive but the wooden yachts had dropped in price, and if you sailed into a marina at that time in a 1960’s wooden yacht, people would look and say “poor chap, he can’t afford a modern boat”.  40 years later, if you sail into the same marina with the very same boat, people will look and say “he must be doing well, he can afford a wooden boat!”

At the start of fibreglass construction the design of yachts changed little, with many builders simply moving to GRP from timber with the same line drawings, leaving us now with several designs from that era in the early 60’s that can be bought in either material.  This leaves the classic yacht world with a bit of a conundrum: is a yacht not classic simply because it was built using GRP?

Take the Twister for example, a pedigree Kim Holman design, superb small cruising boat, fast and seaworthy with elegant lines and a decent interior volume.  Many examples were built over the years by yards up and down the country, the best of which were probably those from the Cardinall Brothers, one of which we will be putting on the market shortly.  However it was not long before the benefits of the design being constructed in GRP were spotted, and now these later versions can be seen regularly around the coast and make lovely little cruising boats.  It was an obvious choice, a great proven design with a big following, built in the fancy new material, splash out on some good marketing and you have a recipe to make money. 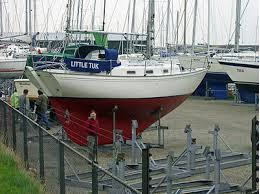 Even though the purist might argue it is not a classic yacht, to all intents and purposes it looks identical to the slightly older timber boat, maybe with a little less varnish, and sails exactly the same, so why should we now not consider these GRP Twisters to be a ‘classic yacht’?  In fact they have been widely accepted by many organisations, and indeed at the recent CRAB Classic Channel Regatta there was a strong contingent of Twisters, both GRP and timber, who had some fantastic competitive racing together.  To my mind the GRP boats only added to the regatta, and quite rightly so, were accepted into the fold alongside the 1927 Patna and the infamous Jolie Brise.

After much deliberation we have decided that the time for Wooden Ships to list GRP yachts has arrived, and we have now started advertising our first ‘tupperware’ boat!  I have been told constantly that the name has to change, Wooden and Plastic Ships, Heathen Yacht Brokerage etc etc, but the truth is that this is as much a classic yacht as any other boat we have sold and I would be proud to own this yacht.  For me it is more about the design than the build material.  The boat in question is a John Alden Challenger Yawl, very similar to the famous S&S Finnisterre and equally as beautiful.  Alden and Stephens were miles ahead of their European contemporaries in terms of design at this time, mainly because of many years of testing hydrodynamics for the US navy during WWII.  While Buchanan and Robert Clark were making long lean elegant yachts, the Americans were producing shallow draft, beamy boats that were disregarded at first.  It was not long before these newer designs were proven to be superb boats with many notable race victories, and the likes of Kim Holman saw the benefits and produced the Rummer Yawl in 1959 which raced hard with Buchanan’s Vashti and was competitive in most conditions.

The Challenger design was first constructed in timber, but by 1960, Halmatic of Portsmouth had seen the boom of GRP yachts in the US and decided very sensibly to cash in.  In a Yachting World article at the time it was mentioned that GRP yachts of RORC Class III and above had not yet taken off in UK as they had in America, “but it will surely not be long before fibreglass yachts like this are a common sight in our waters”.  Halmatic moulded the hulls after which they were fitted out by different companies depending on the owners specification.  This particular example was built for the owner of G-plan furniture so he had the hull taken to Holland and fitted out by Le Comte to a very high standard.  A major refit was carried out in 2002 by the previous owner during which the rig and engine were changed, the hull extensively restored but the interior left original.  She is now for sale in Cornwall at a very reasonable £39,500 which is great value for a solid and fast little cruising yacht that has had this much work done in recent years.

She may well be GRP but to us she is as much a Classic as our own 1960 Camper and Nicholson and we have already moved away from our traditional type of boat with the advent of modern epoxy/wood construction yachts.  Take the Farrow and Chambers Tandem 40 for example, it might be built of wood but it is as far from a traditional yacht as you can get, with many radical design features and a hull that will plane downwind!  Had this been built of GRP we would not have entertained the idea of marketing her at all, but that fact that her hull is mainly cedar and mahogany and she is rather interesting persuaded us to take her on.  We also have a boat not yet on the web site which was designed for offshore racing built in the 1980’s from strip plank and epoxy.  Alices Mirror was a famous racing yacht in her day competing in several single handed trans-Atlantic events with a successful history to her name, and because she is timber we are going to market her.  She is certainly not the typical sort of boat you will see on our web site, but she is interesting and with the speed that race yacht design develops, she is rapidly becoming a classic in her own right.

There are several other GRP boats that we may well be putting on the market this year, including a 1950’s Chris Craft, a Vindo yacht and another fast yacht tender type.

The question of “what is a classic” has been raised from several quarters recently, and although not a new issue, is something that appears to be getting more exposure.  At a meeting during the CRAB regatta this summer regarding a new classics club, the question was inevitably raised as to what boats would be allowed to join.  One gentleman at the meeting came up with an answer that seemed the most logical and straight forward solution I have ever heard.  “A classic boat is one that will not go astern”.  So there you have it, after several recent issues of Classic Boat magazine with interviews from the great and the good of yachting, years of arguments and meetings, it boils down to one simple question, “Does she go astern?”  If the answer is no then you have yourself a classic yacht!