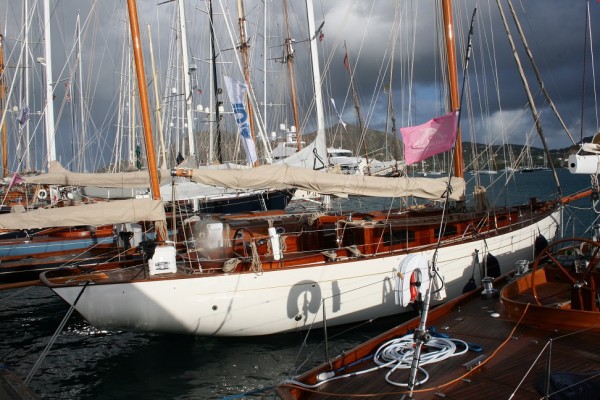 One of the benefits of working in this game is being able to mix business with pleasure, and that is exactly what I am doing this week after accepting an invitation to skipper a yacht for friends in the Antigua Classics regatta.

The boat is a gaff yawl designed and built by Spirit Yachts of Ipswich. true to Spirit form she has a spade rudder and fin & bulb keel which I think is a very interesting combination with the more traditional rig.

After a day out practising with our crew on Thursday, we lined up in the first start of the regatta on Friday with high hopes, and we were not disappointed.  It was a long reach to the first mark in a good F5 with typical Atlantic seas.  We found ourselves 3rd round the mark behind a big bermudan cutter built by Luke Bros. around 1905 called Lily Maid and Marcus Rowden’s 3 mast lugger Grayhound which ate up the distance on this free reach with her enormous sail area, flying along at 10 knots with the wind just aft of the beam.

We gained ground after the second mark on a hard beat back towards Falmouth Harbour, by which time the big boats of the fleet were storming through making a superb spectacle with all cameras on deck for a close quarters fly by of Rainbow, the new J-Class as she was close on the wind doing a good 15 knots.

We  were immensely pleased to pick up the gun on the finish line and found out later we were first on handicap as well, so it is all to play for in the next 3 days of racing……and partying.

More photos can be found on the Wooden Ships Facebook page.