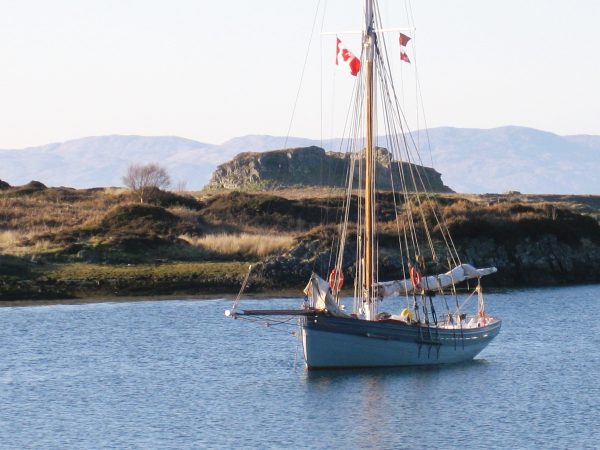 Some time ago I bought a yacht with the most dreadful name. I can’t mention it for fear of
offending the owner or his descendants who gave her this name but suffice to say it is a spice I
really do not like – yet another good reason for changing it.
Changing the name of a vessel was always considered bad luck but I have never heard
any justification for this. Perhaps the myth stems from an attempt to deter a change which
could be seen as a deceitful if simplistic way of disguising a vessel which may have illegal
or unlucky associations. However myths are not gospel so if you really don’t like the name
go on, change it.
That official list of yachts, the Lloyds Register of Yachts was an annual publication
associated with the Lloyds insurance business and nothing to do with the Register of Ships
in Cardiff as commonly and mistakenly though t.As well as the marine insurance business
Lloyds was once a major source of information nautical. When making his famous crossing
of the Atlantic in the 25′ Laurent Giles Vertue 35, Humphrey Barton experienced a knockdown
with serious structural damage. He signalled a passing ship with the request to pass
a message to Lloyds, “Vertue 35. Some sea damage, crew all well.” A masterly
understatement.
There was a time when every yacht had a copy of Lloyds on board so that you could look
up a passing yacht by name to find her designer, builder, dimensions and even her owner,
address and yacht clubs.
As the publication was annual up dating with change of name was not difficult and there is
even a section under the heading List of Late Names of Yachts. Sadly publication stopped
in the mid 1970’s. As brokers and with a whole shelf of Lloyds from the 1950’s to the
1970’s we often refer to them when researching a particular yacht which comes our way.
An earlier version, NorriesYacht List of which I have a 1935 edition also provides a
valuable source of information listed by yacht name.
Yacht names seem to fall into several distinct groups. There is the plethora of Greek and
Latin names although I often suspect that the owners seldom know the dubious deeds
done by dastardly dieties like Scylla and Medusa.
Then there are the subtle and often very clever names. A well-known yacht was called
Danegeld because she was built with money from the owner’s Danish wife – a romantic
gesture which will surely outlive the lady.
Another successful racing yacht of the 1950’s and 60’s, Uomi, only saved from the Silly
List by her race success obviously had keen associations for her first owner.
Stars are another plentiful source of names. When a good friend had a new yacht built to
replace his previous smaller yacht Silver Bear he called the new yacht Callisto, the
naughty nymph turned into the Great Bear by Artemis.
Here we go with myths again. I have often wondered why it is called the Great Bear or
even the Plough when it is patently if unromantically a Saucepan with 2 of its’ stars known
as the Pointers because they point almost directly to the Pole or North Star. That very
recognisable constellation has been the sailor’s friend since the dawn of seafaring so a
name reassuring to the owner of an expensive new yacht.
Then there are the names with associations personal to the owners or just plain nice. The
most famous yacht of all time, King George V’s Britannia is a classic example although you
probably have to be a king to name a yacht after your country.  The J-Class Velsheda was named using the first syllables of the owner’s daughters’
names.
Ted Heath’s Morning Cloud is one of those really nice names recalling summer dawns of
the early morning watch.  The yacht Release, designed by 3 prisoners of war in Germany and built on their return home is an evocative name when you know the story.

In the West Country it is common to name a fishing boat with the prefix Girl or Boy or
sometimes Our. Thus we have the Girl Sybil, Boy Mark and Our Boys.  Scottish fishing boats have some lovely names, sometimes a girl’s name, often a plant.  The Flower of Caithness comes to mind – what a lovely innocent name that is – or Bluebell or The Lady Rose. Are these names reminiscent of home when tossing around on a dark November night off the Hebrides?
Lastly there is the Silly List with classic examples such as Dunpaying, Gophorit and
Tonzabunc. Many years ago we sold a boat called Quick Thinker which inevitably became
known in the office as Slow Sinker. When I last heard of her she was thankfully still afloat
and hopefully with a new name.
With marinas full of modern yachts with silly names and all looking exactly the same it is
no wonder changing a yacht’s name is no longer unlucky.
So what have I chosen? With fingers firmly crossed I have chosen the name Hope, that
lovely old name from before the days of satnavs when hope was a significant factor in
navigation. Not Hopeful or Hopeless both of which might be more appropriate but just plain
Hope. And secretly I hope Hope will remain Hope for many years.