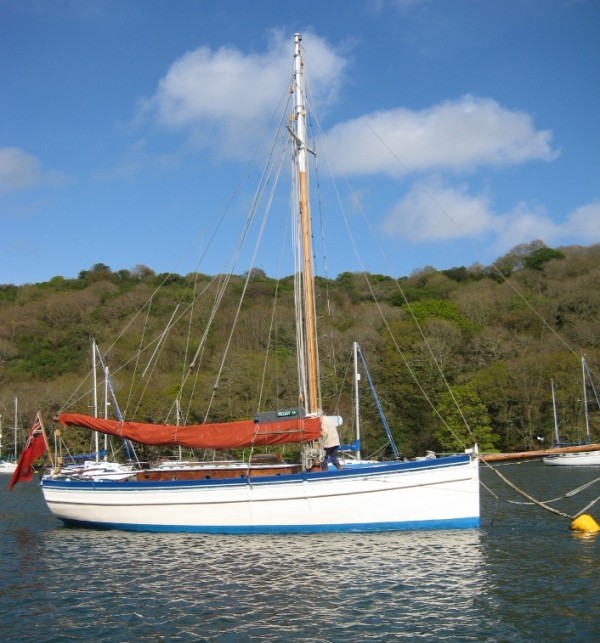 In a letter dated June 1966, G. Sartoris from Ingatstone, Essex, writes that he bought Peggy in 1936 and that he believed she was built by Kittow in Porthleven, Cornwall in the 1890’s.

The yacht has all the signs of a typical Cornish sailing fishing boat of the period known as the Plymouth Hooker because they fished with long lines of baited hooks – a straight stem, slightly raked transom stern, transom-hung rudder and a long keel with a small amount of drag.

Sartoris describes her as ” hull only, fitted with a cabin and 2 single cylinder 7hp Kelvin diesels”.

In his words, “I thought she had possibilities and spent a good deal of time and money on her conversion”.

The conversion was done by Priors at Burnham on Crouch. He describes how he had all the floors doubled, built the coach-roof and designed and built the interior. He rigged her as a gaff sloop with new spars and sails and he kept the twin engines.

Interestingly he says she was never very close winded and that a bowsprit might have helped but he liked the handiness of the sloop rig and finished by saying he liked her the best of all the boats he owned!

The Part 1 register shows various owners in the Essex and Kent areas.

A further long letter from Ron Crick describes how he and his wife Margie found Peggy in Christchurch in 1963 and refitted her over a few years, living on board for much of their ownership until they sold her in 1884 – 21 years ownership.

Based in the Solent and later at Burnham on Crouch until sold to present Cornish ownership by Wooden Ships in 2001, then lying in Essex and returned to Fowey, Cornwall where she is now berthed.

In 2007 she sailed via Ireland to the West Coast of Scotland, cruised the Inner Hebrides as far north as Canna, wintered at Ardfern, cruised around Arran and returned to Cornwall in 2008.

She sailed again to Scotland in 2010, round Arran and the Kyles of Bute and returned to Cornwall at the end of the 2010 season.

In all her cruising, the owners have found her very comfortable for longer periods on board, very sea-kindly and she coped well with some quite testing conditions.

She is remarkably fast off the wind showing  9knts on the log on occasions, (probably  more accurately 7– 8knts!) and passage planning is done on 5-6knts.

Under power she cruises comfortably at 6knts. The off-set prop makes handling under power an interesting exercise but when used to advantage the deflection can be very handy.

Regular maintenance has been done by the owners with expert back-up by Fowey specialist wooden boat builders and the current very nice presentation of the yacht reflects this continued care.

In the 1936 conversion it appears that the topsides were raised by one plank to the level of the original toe rail capping, a new higher level beam shelf fitted and a new deck.

The present coach-roof coamings were fitted with the present deep safe cock-pit to produce a well-balanced little ship which gives her crew a great sense of security in the cock-pit and on deck.

Planked in 1 ¼” pitch-pine all seams traditionally caulked and payed and fastened with traditional galvanised boat nails to oak frames in sawn futtocks of approx 3 ½” x 2”.

All internal ballast in iron pigs.

A 1991 survey report mentions extensive refastening and some planking replacement.

Heavy rubbing strake all round.

The deck is straight laid in solid iroko, caulked and payed, with 9” bulwarks all round carried on through deck oak stanchions.

Most replaced new in present ownership.

Lots of clear deck space on the side decks and in way of the mast.

Heavy Sampson post on the fore deck takes the heel of the bowsprit.

Heavy Sampson each side of the after end of the cock-pit takes stern mooring lines.

Grab rails each side of the coach-roof deck, opening lights each side with brass bars.

Bronze port holes each side and forward.

The cock-pit is deep and safe with a wide bridge deck, laid in iroko over the engine space below. Removal of this bridge deck cover gives excellent all round access to the engine under.

Fuel tank and 2 batteries to port of the engine, 3rd windlass battery to stbd.

Large stowage space to stbd of the engine.

Seating each side of the cock-pit with lockers under.

Access in the cock-pit well aft to the lazarette.

Gaff cutter rig on varnished keel-stepped spruce pole mast, fitted new in 1977 (see Ron Crick’s letter for a detailed description of how he located and made the mast).

Boom sheets with 4-part tackle to a horse over the transom, double tailed, the tails made off to the Sampson posts. Traditional varnished blocks..

Running bowsprit set to port of the stem. Bob-stay on tackle

Staysail in tan terylene by SKB Sails, Falmouth 2007 with one reef, hanked to fore stay

Pair of bronze bottom action mounted on the outside of the cock-pit coamings with twin adjacent cleats.

Halyards on straight pull, made off to a galvanised ring of belay pins round the mast.

Centre-line installation with excellent access under the bridge deck.

3 x 12v batteries on 12v circuits. One battery is dedicated to the electric windlass.

Modern port and stbd nav lightsd on light boards in the rigging.

2 lights in the cabin + one fluorescent light.

Spacious fore peak with stooping head-room under the fore deck, fine Blake Victory sea toilet against the varnished oak Sampson post, rebuilt 2012 and fitted with a varnished seat, fore hatch above, lockers either side, chain locker forward of the Sampson post.

Saloon cabin with port and stbd settee berths, separate from the double berth by a part height bulkhead.

Chart stowage in locker behind the seat back against the fwd bulkhead.

Galley in the after stbd corner with Taylor’s 2-bruner and oven paraffin cooker and stainless steel sink/drainer.

Lockers and shelves in the after port corner.

Legs (timber) with through hull bolts and securing lines.

An exceptionally well-found little ship in excellent, experienced ownership and past owners all speak very fondly of her.

She has done more miles than most with the present owners and given them some very good sailing, her sea-kindliness much appreciated by the two family dogs.

This is one of those boats with a good, tight, dry feel to her, everything in its place and a place for everything.

The cabin accommodation is ideal for two, she has been a comfortable live aboard for two in the past ownership and is easily sailed by two.

She is presented in smart, tidy and clean condition and while it is too easy to criticise the other chap’s boat and always possible to find something to do on any boat, this is a terribly attractive, traditional gaff cutter of a very handy size, ready for sea, well-proven in present and previous ownership and with some documented history which is always interesting.

She has the feel of a bigger boat than her dimensions indicate, the cock-pit gives a tremendous sense of security and the cabin is absolutely delightful.