This is without doubt one of the most stunning and eye catching yachts in UK waters and requires a new owner who has the ability to sympathetically refit her to retain the charm and beauty that was built in to her in 1937.

Designed by William Maxwell Blake and built by Whisstocks of Woodbridge in 1937, she was a wedding present for her first owner, E.P Allen.  He owned the boat through to 1951 and was the first editor of the RCC Atlantic Crossing Guide.  The intention was to carry out a transatlantic cruise, and while this never came to fruition, she was built with this in mind hence the reason why her scantlings are slightly over spec.

Blake took his inspiration from EP Allen’s winning entry to a Yachting Monthly design competition, and Mirelle is remarkably similar to the John Alden designed ‘SVAAP’ which differed with a transom stern and Bermudan ketch rig.  The addition of the counter was a stroke of genius and never has a sweeter set of lines been put on paper than when Blake drew the counter of this yacht.

Blake also employed the metacentric shelf theory in her design, as did the well known designer Dr T. Harrison Butler.  This means the hull and rig is incredibly well balanced and she can be trimmed to sail with neutral helm on virtually any point of sail.

After many years of adventure with the yacht, including a tale of sailing her through a minefield immediately after WWII, Philip Allen eventually sold her after commissioning a new larger boat, CORISTA, designed by Jack Jones, from Whisstocks.  The second owners were Mr and Mrs FFV  Manfield who bought the boat through George Jones, Jack Jones’ brother, who was the Woodbridge broker and “Yachting Monthly” correspondent, after being towed into Ramsgate with engine failure in their own motor boat.  They had decided they wanted to learn to sail, George Jones assured them that they could learn to sail on her and they duly did. The Manfields carried out significant work including a new mast, replacement engine, and replacement of all strap floors.

After 33 years of fun, the Manfields sold the boat to the current owner in 1984 who has sailed her many miles around the southern North Sea and English Channel.

She has undergone 2 significant periods of refit in the present ownership, the first after sustaining damage in the 1987 October hurricane, and the second in 2001 after she had started making a little water.  At this time the strap floors were replaced again, several frame futtocks replaced, the mast step renewed in teak., The cockpit was replaced with a self- draining epoxy/plywood design in 1995.

She has now been laid up ashore for four years and is in need of a new injection of enthusiasm to get her sailing again. 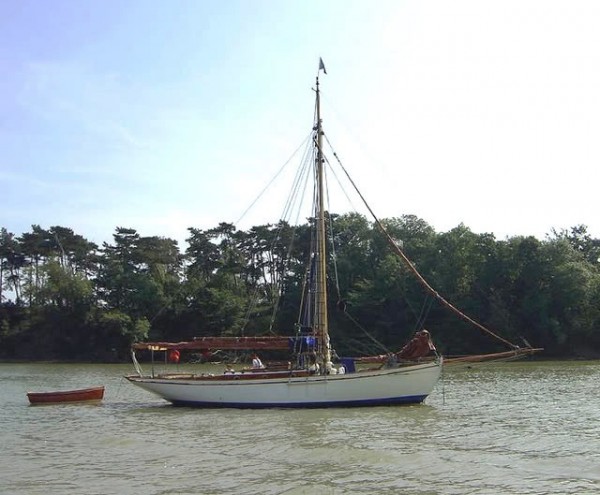 Heavy pitch pine beam shelf with clamp in way of the shrouds and a pitch pine bilge stringer at roughly waterline level for added strength.

Strap floors made of iron. Last removed and replaced new in 2002

Original 1 ¼” straight laid teak deck on oak deck beams, caulked and payed in the traditional manner.  Originally secret nailed, it was later screw fastened from the top with plugged screws.  The current owner has since applied Coelan to the deck and finished with Blakes deck paint to give a low maintenance and watertight deck.

Simple self draining cockpit arrangement constructed of sheathed marine plywood, with teak grating, new in 195..  The coachroof coamings extend aft to create the cockpit coamings fitted at deck level and finish at the aft with a large corner post.  The aft end of the cockpit is open and flush decked.

The cockpit well is constructed of sheathed marine plywood with seating at deck level.

Tiller steering with an ash tiller on a bronze head fitting protruding through the aft deck.  Varnished teak hatch between aft end of cockpit well and the tiller head gives access to the lazarette.

Bridge deck to the entrance hatch with a brass compass binnacle on the bridge deck.

This yacht has the most graceful lines with a sweeping sheer and delightful counter stern.  She has a reasonably high freeboard for a yacht of this period but that does not affect her grace due to the elegance of the sheer.  The interior volume is significantly more than contemporary yachts because of the fullness of the bilge and unrestrictive beam, giving a nice feeling of space and comfort within the cabin.

Flush deck to help with the line of the sheer.  Galvanised stem head fitting with chain roller to starboard and gammon iron to port.  The high varnished teak toe rail stops short of the stem on the port side to allow the offset bowsprit to pass through.  Bronze fairleads set into the toe rail with cleats either side.

Pair of bitts and traditional roller system for the heel end of the bowsprit offset to port with a galvanised Reids manual windlass aft of this.

The low profile coachroof extends forward to just aft of the mast with a nice radius to the coachroof deck to please the eye.  Full length teak handrails either side with a centreline butterfly type skylight with armoured glass.  Sliding companionway hatch on the centreline aft of the skylight.

Well type cockpit continuing the flush deck design leads to the small aft deck with open taff rail.  Bronze mushroom vent and bronze mainsheet horse, made new to the original design as it was omitted from the original build to save cost.

All other spars are varnished pine including the gaff, boom, staysail boom, bowsprit and topsail yard and jackyard.

Galvanised wire standing rigging by Spencer Rigging of Cowes, last replaced in 1984.  The rigging has been well maintained and appears in good order.

Triple lower stays with a single cap shroud.  Forestay to the stem head fitting with outer forestay to the bowsprit end.  Running backstays with stainless steel wire falls to Highfield levers on the side decks.  Wykeham Martin No.4 reefing gear for the jib on bowsprit traveller.

Dead eyes and lanyards to external galvanised chainplates, removed in 2003, re-galvanised and replaced with new bolts.

The main working sails all appear to be in good condition even if they are a little old.  They were made from a Dutch material which is a mix of cotton and Terylene dressed in oil and ochre.  This combination produces a material which looks very traditional and in keeping with the yacht, is very nice to handle and incredibly durable.  Tow foresail and topsail are of blue Terylene.

Total working sail are of 670sqft.

Pair of bronze Murray top action handed winches on the outboard side of cockpit coamings fitted on large teak bases.

20 gallon Vetus plastic fuel tank aft on the port side by the engine.

All seacocks are Blake’s cone type; all have been replaced and regularly serviced .

All wiring renewed by Deben Marine in 1990’s to a high specification.

12-24v step up transformer for navigation side lights that run on 24v.

The interior was entirely replaced after the 1987 refit as much of it had to be removed to gain access to the damaged areas of the hull.

Centreline entrance hatch with “garage” with steps down over the teak soundproofed engine box.

Stainless steel sink with bronze hand pump tap from 2×25 gallon stainless steel tanks port and starboard in the saloon.  Sink is pumped overboard via the manual bilge pump and a diverter valve.

Storage lockers behind the galley with leaded glass doors.

Quarter berth to starboard with easy access and ample headroom..  Oikskin’s and sea boot locker ahead of quarter berth.

Saloon with 6’ headroom and a centre line drop leaf table mounted on stainless poles fixed between the deck head and cabin sole.  These double as strong hand holds in rough weather.

Wide settee berth to starboard, with a settee berth and spacious pilot berth to port.  Chart table folds down over the aft end of starboard settee berth so as not to encroach on the space while in port.  Electronics panel by the chart desk under the deckhead with switches, GPS and sounder.

Large locker at forward end of the berth on the port side with a large Shipmate solid fuel stove alongside, set in an insulated hearth with flue going out through the deckhead.

Locker and storage arrangement to starboard.

Wide passage way going forward set to the starboard side of the mast with a clever folding door arrangement that doubles as a heads door.  Hanging locker to starboard and heads to port.  The passageway appears to open up the whole interior of the boat by being wider than normal, allowing line of sight right through from the companionway to the stem.

Heads with a Baby Blake sea toilet and pull out sink that drains directly into the toilet.  Bronze fresh water hand pump.

Forepeak with 5’ headroom.  Full length berth to port and a drop down pipe cot to starboard if necessary.

Alternative winter cover for use if laid up  afloat.

This is a delightful yacht by anybody’s standards, beautiful and elegant, manageable by one person who knows what they are doing and with a history that is coloured with many tales.  It is very rare to find a yacht of this pedigree and beauty in this size, small enough that she is a viable proposition for many yachtsmen and large enough to be a sensible family cruising yacht without having to live on top of one another.  The fact that she has had three owners in seventy-six years speaks for itself.

She is a very docile boat and easy to handle; she has none of the vices of some gaff cutters and will always answer her helm.  The side decks are 2ft wide and the foredeck is unobstructed.

The hull lines were drawn in accordance with the then-popular “metacentric shelf theory” and she can be steered with a very light touch on the tiller; in fact the light weather helm can be trimmed out completely by adjusting the internal ballast, if wished.

The running bowsprit is entirely traditional and is a great help with marina dues in Holland and Belgium.

The un-cut aft coach roof coaming adds a lot of strength and watertight integrity, and the lack of cockpit lockers, apart from the lazarette hatch in the counter, makes her safe in bad weather; I have had the cockpit full in an F9 and the drains do work well.