This boat is a fine example of a classic Robert Clark designed sloop. Having had only 2 owners since new and being under the current ownership for more than 40 years she has been professionally maintained to a very high standard throughout her life. The design has been well proven and she has earned a good reputation when racing in the early years and been extensively cruised under the current family ownership; spending time cruising in European waters including the Baltic.

Subject to an extensive programme of maintenance during the last 25 years she has had considerable sums spent maintaining her in very much original trim. Some upgrading has been undertaken to make life at sea easier for the crew including a roller furling genoa, modern jabsco type sea toilet and deck wash system. In great original condition above and below decks she would be ideally suited to somebody interested in competing in some Classic Yacht Regattas or rallies. The original build drawings and scantlings along with a number of design reviews from the time of her build are held by the owner and available to view upon request.

She has been cruising throughout the 2017 season and viewing is highly recommended for anybody looking for a classic yacht. 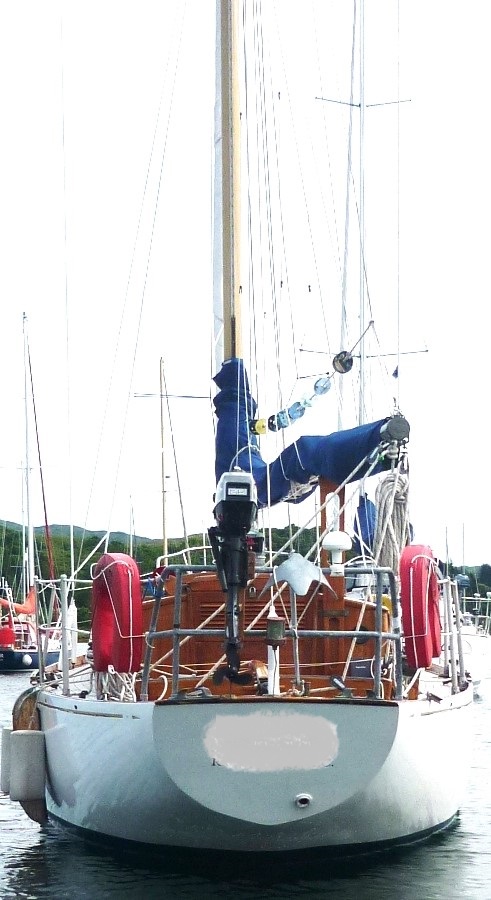 Deck is constructed with oak deck beams, traditional laid teak deck, coachroof and coamings. The hull is currently finished in red antifouling beneath the water and white gloss topsides. On deck the margin boards, coachroof sides, cockpit coamings and structure are all finished in gloss varnish.

throughout the current ownership with the hull extensively re-planked below the waterline in iroko.

extensive regular works in regard to deck caulking, bright work internally and externally and hull painting which are all deemed to be routine maintenance.

replaced. All 9 strap floors completely removed and refurbished before re-fitting with

The original build drawings and scantlings are held by the current owner and would be part of the paper work exchanged at the time of sale.

Rigged as a masthead sloop the boat was originally fitted with all timber spars. The original

timber mast was replaced with an anodised alloy spar in 1964, the boat retains the original

timber spar for the boom. Standing rigging was last replaced in 1996 however the forestay was replaced in 2005/06 when the new Profurl roller reefing system was fitted. The boat benefits from still having the original bronze primary and secondary winches fitted on the cockpit coamings.

Spinnaker – Believed to be original!

With the traditional solid teak laid decks still in place, gloss varnished margin boards and white painted coach roof with a generous assortment of the original bronze fittings all still in place Tryad feels every bit the gentleman’s traditional yacht when standing at the tiller. The

comprehensive programme of routine maintenance has meant that the boat is still very much in original trim on deck with many of the original period fittings; including Lilley & Reynolds compass and bronze winches all still functional.

The toerail,margin boards and king plank all finished in rich gloss varnish converge at the twin bow roller stainless steel stemhead fitting. Two small fairleads are provided on the capping rails port and starboard for securing lines when alongside to the two substantial traditional bronze and timber cleats.

and controlled via a plug in remote control. When not in use the CQR anchor stows on timber deck chocks.

passage for crew fore and aft. Stout grabrails run the full length of the coachroof with the deck hatches and dorade boxes being finished in gloss varnish. Being of traditional design all

halyards and reefing lines are handled and secured at the mast.

The cockpit is well protected with deep coamings keeping the worst of the weather and spray off the crew on passage. The whole cockpit is constructed of teak and finished in gloss varnish with exception of the sole and grating. Locker space is provided under all the seating with the engine controls cleverly concealed within the locker to starboard.

The long, elegant arching tiller extends well forward into the cockpit while the mainsheet runs on a horse mounted on the deck immediately aft of the cockpit.

classic feel of the boat has been maintained. Light pours in to all areas through the large

portlights with the white painted deckhead and bulkheads offset with varnished teak panels and trims.

The forepeak provides two single berths in the traditional V-berth layout and generous headroom in the central area aft. Access to the chain locker is provided through the forward bulkhead with sufficient room for storage of additional gear if required; the emergency tiller is currently stored neatly within the locker space.  Storage is provided beneath each bunk in the form of small drawers and overhead shelves outboard.

Immediately aft of the forepeak the heads compartment is located to port and benefits from having been updated recently with the installation of a Jabsco type marine toilet. The

compartment is also fitted with a porcelain sink and small vanity unit. Across from the heads

compartment to starboard is a full depth hanging locker ideal for the storage of jackets etc.

Occupying the main body of the below decks space the saloon is laid out in a traditional fashion with the keel stepped mast located centrally at the forward end. Bench seats run down both port and starboard sides for the full length of the saloon with a centrally located drop leaf table.

On the port side a ‘trotter box’ provides additional bunk length for the taller crew member while storage is provided outboard in lockers overhead and behind the seat backs.

To starboard the Taylor’s paraffin heater is mounted on the bulkhead and protected by a small storage unit below and full height timber pole. Again the bench style bunk runs the full length with storage provided in lockers overhead and behind seat backs. Additional light pours into the saloon area from the traditional style deck hatch.

A compact galley is provided to port with a gas cooker, sink and storage for crockery, cutlery

and utensils. The original Cornishware crockery around which the storage units were built is still aboard and included in the inventory.

The faucets for the galley sink and its drain operate using the original bronze hand pumps adding to the classic appeal of the boat.

Opposite the galley to starboard is the nav station with fold down chart table and ships switch panel. At the forward end of this space before the starboard settee starts is located a second hanging locker, ideal for the storage of foul weather gear.

With the table folded up the quarter berth is accessible providing a generously proportioned single berth.

In way of the companionway a small seat is also provided to starboard with a similar seat folding down to port over the galley sink when required; allowing crew to shelter when making passage in poor weather conditions.

accessed by removing both a top and front panel which then provides excellent access around both the engine and gearbox. The engine has been professionally serviced since its installation with new engine mounts having been fitted in 2015 and the water pump being rebuilt during the winter 2014/15.