Aeolus is a fast, elegant gaff cutter built in California in 1904 for inshore racing and is an ideal boat for classic regattas and coastal cruising. After a major rebuild in 1983, she was imported to the UK in 2003 and re-rigged with a powerful, beautifully balanced sail plan designed by the late Ed Burnett – she now goes like a greyhound with her seven sails flying.  Aeolus is well known at the Solent classic regattas and won the 2019 OGA Annual race.  With only blocks and tackles to set the sails, she offers a traditional sailing experience with modern performance.

She has a lovely polished wood interior, hand-crafted in varnished mahogany and pine with a saloon table for the whole crew to socialise.  Traditional in atmosphere, modern functionality – a flag locker adjacent to chart table with wifi instruments – enables both racing and long distance cruising.  She has 8 berths in three cabins with standing height throughout.

She has the reassurance of a largely new hull, rig and machinery and a clean insurance survey from 2017.  Fully equipped and in excellent condition, she is kept covered all year to protect the decks and varnish.  All spars apart from the mast were replaced by Collars, new sails made by SKB in Falmouth. 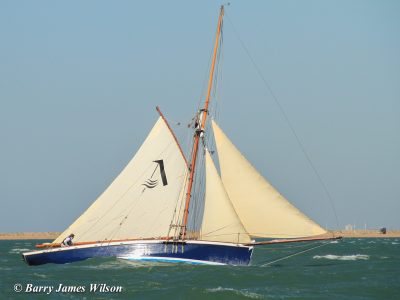 Double planked below the waterline to a total thickness of 2″.  This extra layer of planking was fitted during the rebuild and is laid over new planking, not old damaged timber.  Sheathed externally to the waterline to protect the hull from worm damage.

No external ballast keel.  She has 6 tons of lead ingots under the saloon sole.

Some stainless steel strap floors aft can be seen.  Floors through the centre of the boat are likely to be either stainless straps or timber.

A very substantial toe rail all round made of laminated horizontal layers of Oregon Pine with a varnished Mahogany capping rail.

Rig was totally redesigned by Ed Burnett in 2011 to get the boat properly balance under sail.  This was achieved by changing the shape of the mainsail and increasing the area of the headsails.

Gaff cutter rig on a solid Douglas Fir mast, believed to be from 1990.  Douglas Fir topmast made by Collars in 2011.

Dead eyes and lanyards to external bronze chain plates over channel boards to get more width on the rigging.

Running backstays to main mast and topmast on tackles.  All sheets are tensioned with tackles.

Running rigging is all traditional 3 strand with varnished wooden blocks and belay pins.

All working sails by SKB of Falmouth in 2011, main topsail 2013.  She also carries a Yankee, jib top and asymmetric spinnaker.  Mainsail cover used at all times when not sailing to protect the sail.

2 x 12 volt batteries charged from the engine alternator or through the installed shore power system.

8 berths in open plan accommodation which makes the most of the space below decks.

Steps down from the companion hatch, engine box behind the base of the steps.  Chart desk to starboard faces aft with a seat, drop down desk, flag locker and electrical switch board.

Passageway to port of the companion steps into the aft cabin with 2 single berths and storage space.

T&G covered plywood bulkheads separate the saloon from the aft end of the boat.  Single saloon settee berth either side with a pipe cot above.  Centreline dropleaf table made from rich varnished mahogany.

Varnished pine bulkhead at the forward end of the saloon with a centreline passageway.  Galley split either side of the boat with a single stainless sink to port with a bronze manual water pump and storage below.  To starboard is a worktop with a portable gas stove secured in its own space.  Two portable 12 volt cool boxes.

Starboard side passageway to the forecabin with a V-shape double berth and forehatch above.

All over boat cover