The Norwegian designer, Colin Archer, is famed particularly for his double-ender life-boats or Redningskoite.  In his life-time – he died in 1921 – he became one of the most famous marine architects the world has seen, celebrated in his own country and abroad, an inspiration to many designers since, yet he was self-taught.  His designs included yachts, fishing boats, pilot boats and larger ships like the famous Fram which Nansen locked into the Polar ice.

Colin Archer designs inspired many of the great designers and produced some of the best-known cruising yachts. One thinks of Robin Knox-Johnson and Suhaili, Wm Atkin in the USA, the remarkable Ehrling Tambs with Teddy and Paul Johnson with his Venus ketch range of double enders. His middle name was Ehrling and he was brought up on Escape owned by his parents for so many years. You can see the way their minds worked!

David Robertson had sailed long distances in the first Escape, a 23 ton yacht designed by Colin Archer in 1896 as a sailing life-boat, had become convinced of the viability of Colin Archer’s designs and wanted his next boat to be a larger version as a sailing home.

He commissioned the London marine architect, Wm McC. Meek to refine the designs of the first Colin Archer Escape and enlarge them to become the 32ton second Escape now offered for sale.

He knew and admired K Christensen who had a small yard in Moen close to Risor in Norway and engaged him to build the yacht. (As he said at the time, Christensen was also one third of the price of building in UK). She was launched in 1936. 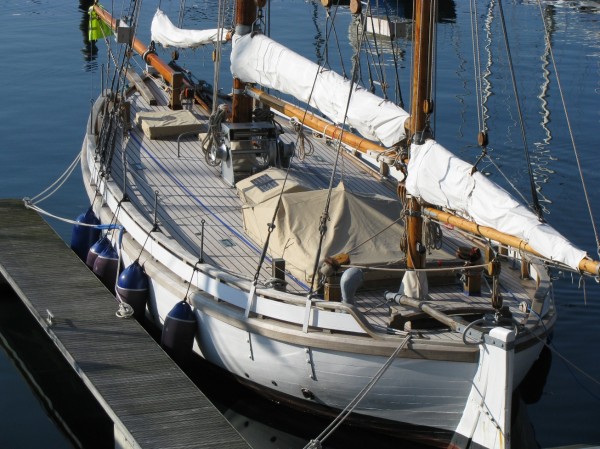 The design is a classic Colin Archer though perhaps a fraction less in the beam and a little finer below the waterline and was built to scantlings 25% in excess of Lloyds Rules.

After the war she came into the ownership of Mr and Mrs Edward Spencer Johnson. She spent many years laid up afloat on the Hamble River as the Johnson’s home. On his death and with Mrs Johnson unable to live aboard by herself, Escape was sold in 2003 by Wooden Ships on behalf of the family to Mr John Charles. When his health failed before he was able to start refitting, she was sold again by Wooden Ships to the present owner, a Scottish helicopter pilot.

She was put ashore at Universal on the Hamble and lay there for a couple of years while arrangements were made for her refit.  After 2 attempts due to her unexpected weight, she was finally moved by road to Lowestoft where she underwent a major rebuild at the IBTC Commercial Boatyard in Lowestoft, to be relaunched in 2008.

She sailed back to Risor that season, returning to UK and in 2009 sailed to her present berth in Scotland.

Planked in Norwegian red pine with larch used for the new planking used in the refit.

The back-bone, stem and stern post beam shelves and stringers are Norwegian oak. A new English oak stem was fitted in the refit.

There are 28 frames in all, made up of Norwegian oak in grown futtocks totalling 8” x 5” at 18” centres leaving a gap of only 10” between the frames..

The planking is fastened to the frames using 1” juniper trennels with oak wedges.

Grown oak floors across the centre-line.

The deck was relaid in the refit using iroko, straight-laid, caulked and payed. The cover boards are varnished iroko.

Most of the oak deck beams are original, finished varnished.

The bulwarks are carried on short 4” x 4” oak stanchions mounted on the cover-boards in cast bronze shoes to eliminate any possibility of the leaks and rot so common in this area.

The capping rail is original in teak, swept down to the deck forward and aft in typical Colin Archer fashion.

The bulwark is formed by a single plank, open above and below to allow water on deck to escape with minimum obstruction.

A heavy iroko rubbing strake runs round the hull at deck level, adding to her strength.

A single high level stainless steel guard wire is carried on bronze stanchions set through the capping rail into pods mounted on the coverboards.

Heavy oak Sampson posts trimmed and capped with bronze mounted either side of the cock-pit on the aft deck. Another pair mounted on the fore deck. These Sampson posts usually take the mooring lines.

Centre Sampson with galvanised side strap on the fore deck takes the bowsprit heel, allowing the bowsprit to be run in.

A heavy timber plank bolted to the deck either side of the bowsprit extending forward by approx 3’ with a sheave in the outer end takes the anchor cable well clear of the hull. The stbd cable is usually employed and a timber chafing chute along the deck protects the deck from chain chafe on it way aft to the windlass by the main mast.

The deck is exceptionally spacious and clear with little to trip over on a dark night.

2 pairs of deck prisms in the side decks.

A narrow athwartships cock-pit is placed forward of the mizzen mast and the main sheet horse with a full width dog-house to shelter it, the comings continued round the cock-pit well. A sliding hatch in the dog-house gives entrance to below. Dog-house and coamings are original in heavy teak with bronze ports in the forward face.

The cock-pit is cleverly placed here to avoid the inevitable drips from the mizzen and far enough forward to avoid any water which may come on board from the quarter wave in bad weather.

Steering is by wheel in the cock-pit on the after bulkhead with under-deck cables through a deck pulley fitting either side to a bronze sliding collar on a long tiller. The rudder is hung on the stern post with new galvanised rudder hangings. The tiller rests on a support on the deck.

Teak gratings in the self draining cock-pit

Hatch to the lazarette under the tiller forward of the mizzen mast.

Hatch on the fore deck, port side forward.

Original anchor 2-speed manual windlass just abaft of the main mast with twin warping dollys and chain gypsy behind the stbd dolly, returned to Reid and Co Glasgow to be rebuilt.

Galvanised wire rigging set up to external forged iron galvanised chain plates with galvanised rigging screws, all new by TS Rigging in Maldon Essex in 2008. Ratlines up the stbd shrouds.

3 lowers to the main + topmast shrouds round galvanised up-swept spreaders. Deck flood lights on the spreaders.

Twin shrouds to the mizzen.

Outer fore stay set running to the end of the bowsprit, tensioned on a tackle brought in board.

Staysail boom sheets to a horse in front of the main mast.

Jib on leathered traveller outhaul on the bowsprit.

Main boom with galvanised, twin mast band fittings sheets to a horse aft of the cock-pit with 4-part tackle (two double wooden blocks) and lead blocks either end of the horse to take the tails of both sheets to make up on the Sampson posts, easily reached from the cock-pit.

Main boom is hung by a tackle up the mizzen for a topping lift.

Falls secured to a pin rail at working level round the main mast or taken to the windlass for mechanical hoisting.

Mizzen boom sheets to a galvanised steel bar loop over the rudderhead to a served span on the boom, the single tail led in the make up on the Sampson post. Conventional topping lift.

All sails by North Sea Sails, Tollesbury, new in 2008.

Staysail with one reef bent onto the staysail boom.

Jib sets on the traveller to the end of the bowsprit.

Centre-line installation in spacious engine room aft of the cock-pit with the engine actually sited under the cock-pit well, access through the lazarette hatch.

From aft: Companionway from the cock-pit through the teak sliding hatch, emergency axe clipped on the hatch coaming. Open-tread teak ladder to below, slightly off-set to stbd.

The sink is pumped out overboard by a hand pump in the cupboard below.

Bulkhead door to the saloon cabin.

Slightly staggered port and stbd settee berths with a side board at the aft end of the stbd settee and at the fwd end of the port settee, original drop-leaf teak table between.

Part enclosed pilot berth up behind the settee berths each side. Water tanks under the pilot berths.

Slightly port off-set bulkhead door forward, step up in the cabin sole, to a double berth to port and heads compartment to stbd.

The double berth is set quite high due to the forward hull sections, allowing space for 4 large drawers below the berth.

Porcelain hand basin with H&C in a surface along the ship’s side with lockers below and mirrored locker doors above.

Chain locker alongside the mast to stbd bringing the chain weight well back into the hull.

Good head-room throughout the yacht with over 6’ in the saloon cabin and lobby, a little less in way of the main mast increasing forward.

All hull structure clearly visible and accessible throughout the boat. Excellent ventilation with bronze mushroom vents forward and aft + large vent aft into the engine room.

Varnished deck-beams, white painted deckhead and T&G bulkheads, varnished mahogany trim to the bulkheads. Simple, clean-lined styling typical of the period she was built. Great care has been taken to reuse the original fittings such as 1930’s glass cupboard door handles, proper brass hinges with stainless steel pins, a custom-made steel stand for the diesel cabin heater avoid any fuel loss and dirt etc. The interior was completely rebuilt in the 2008 refit and although the basic lay-out is as built the quality and finish is much superior.