This yacht sailed into Plymouth in the early 1970’s, was chased by the police for suspected drugs offences and went up on the rocks in Plymouth Sound.  She was taken to Mashfords Boatyard in Plymouth where she lay for many years as a hospital project for the yard.

The interior was removed in the drug search.

The damaged planking under the stbd bilge was replaced.

The yacht was reframed all through and refastened.

The heavy galvanised floors were all replaced.

The yacht was bought by the present owners some years ago and finally underwent completion of the rebuild at Gweek Quay Boatyard. She was launched in the spring on 2010 with some finishing work still to do. 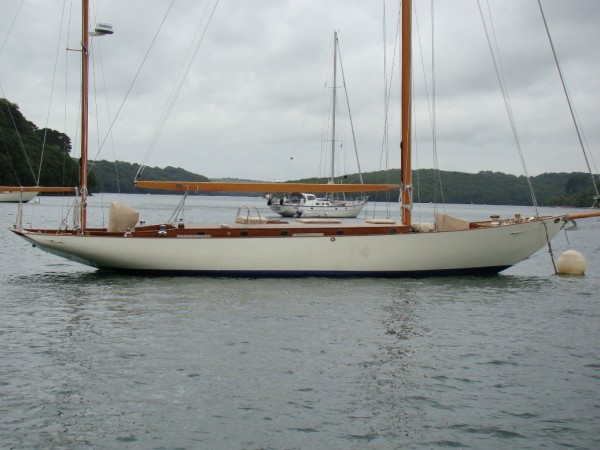 In the Gweek Quay refit, the deck was replaced in yacht-laid teak on a ply sub deck.

All new deck joinery was built to original plans.

A new cock-pit was built.

New wheel steering on Mathway pedestal carries a chart plotter in a varnished box on the pedestal.

A new interior designed and fitted with:

One double cabin aft with ensuite heads and shower

2 pilot berths in the saloon (in addition to saloon settees)

Planked in pine, caulked and payed with exceptionally fine finish to the topsides.

Cutter headed with masthead stay to the end of the bowsprit, inner fore stay to inside the stemhead, single standing backstay to the main back to the counter.

Mizzen with single swept back spreaders.

All new sheets and halyards

New fuel tank opposite to port.

All new accommodation with 8 berths.

Passageway aft to port through a twin berth up and down cabin.

Aft again through a heads compartment with sea toilet, hand basin and shower.  Door to saloon.

Opposite to stb, a twin berth up and down cabin with door to the saloon and a door to the heads.

Port and stbd settee berths in the saloon with pilot berth up behind under the side deck to port.  Lockers above the berth to starboard.

Companionway to deck on the centreline aft.

Chart desk to port of the companionway ladder.

Passage past the galley aft to the aft cabin.

Large double berth reaches back under the cock-pit well.

Engine under the side deck to stbd.

Lockers under the side deck to port.

Door to port into the ensuite heads compartment with 12v electric sea toilet, porcelain corner hand basin and shower. Lockers under the side deck.

Fresh water tanks in the midships bilge and under each saloon settee berth.

Showers and hand basins drain to a collecting tank in the midships bilge with auto float switch pump-out overboard.
A spacious, light and airy cabin with fine joinery and some exceptionally nice features like the corner cupboards in the forward corners of the coach-roof and the marquetry inlay on the chart desk.