The Lion Class was a very successful design from the eminent Arthur C. Robb.  Many examples were built by the Cheoy Lee Shipyard in Hong Kong as this boat was and they benefitted from the close proximity of tropical forests from which the best teak could be sourced.

The Lion Class designed altered slightly with deep and shallow draft variants.. This yacht is the deeper type at 5’7″ with a reasonably cut away forefoot making her nimble and quick in the turn.  Elegant stretched ends with a sleek counter and a very sweet sheer line which is helped by the low profile coachroof.

This yacht had a major refit in Bermuda in the 1990’s where much of the interior was altered and the bronze strap floors were fitted to replace the original galvanised steel.  after crossing the Atlantic several times and competing very successfully in the Antigua Classics Regatta in 2004 and 2005 she came back to UK where she has been based ever since.  Her successful racing career continued with  notable results in the Round the Island Race and other Classic Regattas.  In the present ownership she has had a good deal of updating including a new engine, sails, rigging and systems and has been used mainly for summer cruising around Scotland and a circumnavigation of Ireland covering about 5000Nm a season.  She has also been successful in club and classic racing.   The rig has been altered to a yawl giving more flexibility for shorthanded sailing and other smaller more subtle features have been added to make life easier and safer for the lone sailor.  She has stack pack systems on both booms, single line reefing on the main and all the lines from the main mast have been led back to the cockpit.

She has had a thorough cosmetic spruce up in present ownership as well as the more serious structural work and is now in lovely condition and will attract admiring glances wherever she goes.  A true pedigree yacht with a successful history of racing and cruising.

Two bilge stringers running the length of the yacht plus the beam shelf with a heavy clamp in way of the chainplates and mast and bronze hanging knees.

The original strap floors have been replaced with bronze straps and bolts which is infinitely better than the use of galvanised steel.

Marine plywood deck sheathed externally with epoxy glass cloth and finished with cream deck paint.  The side decks are wide and clear for easy movement.  Varnished teak toe rail all round with profiled scuppers cut out where necessary.

Self draining cockpit which has been modified by the present owner with the addition of sloping teak boards outboard of the coamings. These serve as bases for the sheet winches but also as comfortable seating when the boat is heeled.  Tiller steering from the rudder stock which protrudes through the cockpit sole at the aft end.  Varnished teak cockpit thwarts are hinged to give access to large storage lockers.  Bridge deck with a locker beneath.

Varnished teak coachroof coamings with bronze framed portholes either side.  The low coachroof lifts at the aft end into a small doghouse giving ample headroom around the galley and chart desk area.

There is a hatch in the foredeck allowing access to the anchor locker which is large enough for storing fenders,  warps and sails while underway.

Lewmar hatch on the forward part of the coachroof for access and ventilation.  Varnished teak dorade boxes with screw in bronze dorade vents.  Varnished teak skylight aft of the mast over the saloon.

The doghouse has a garage for the sliding hatch built into it, all in sheathed plywood and a fitted spray hood on a stainless frame giving marvellous protection to the cockpit.

Bermudan yawl rig on alloy spars.  Main mast is deck stepped with suitable support underneath including a galvanised steel ring frame.  The mizzen is stepped onto the sternpost.

This yacht was originally sloop rigged and has been converted to a yawl in present ownership (work carried out in 2012) to give more flexibility in the rig for cruising while shorthanded.  Having the mizzen allows for upwind sailing using the headsail and mizzen and negating the need for the large mainsail thus reducing the stress on the boat and the crew.

Stainless steel standing rigging renewed 2012 – 2014 as was all the running rigging with colour coded lines.  All running rigging from the main mast led aft through organisers to the cockpit for ease of use.  All main masthead fittings replaced in 2009.

Both mizzen and main booms have a stack pack system fitted so the sails can be dropped straight into the bags without having to go on deck. 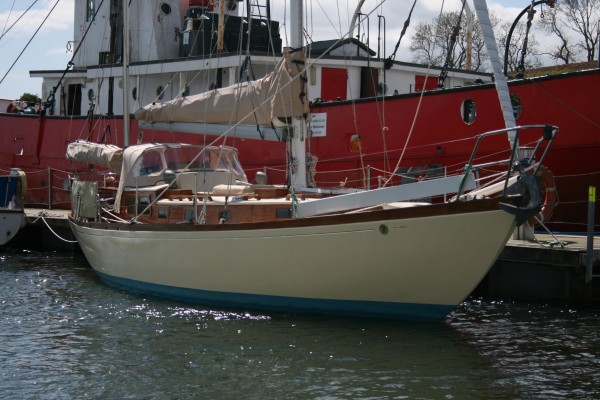 She also carries a storm jib, spinnaker and a mizzen staysail.

Lewmar 30ST winch on the coachroof deck to handle the lines running aft. 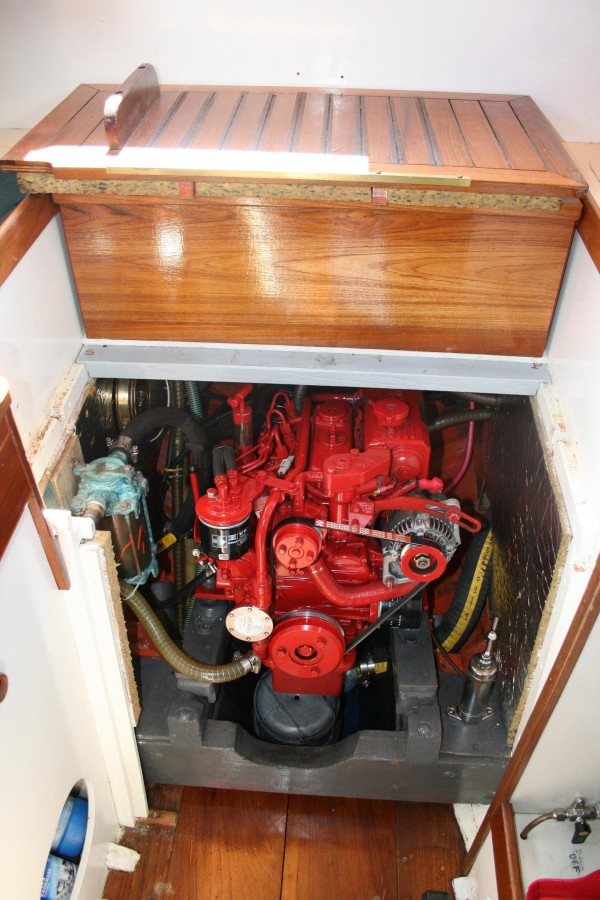 Single lever controls in the cockpit.

Domestic hot water calorifier connected to the engine plus a heating matrix for hot air heating in the saloon.

All batteries new in 2013.  Charged from the 80amp engine alternator.

Steps down over the engine box from the companion hatch into the main saloon.  There is a large varnished teak removable tool box fitted on the engine box lid.  Galley is to port and chart desk to starboard.

Saloon settee berths are staggered and extendable with the starboard side set further aft to allow for the heads compartment further forward.  The starboard settee berth has a trotter box under the chart desk.  All new upholstery throughout.  Large lockers behind the settee berths which are easily accessed.  Some shelving and lockers above the settees including a drinks cabinet each side with glazed doors.

Most internal lighting is LED to save power.  Eberspacher diesel heating system installed new in 2013.

Passageway slightly offset to port through to the forecabin with twin V-berths.  Battery for the anchor windlass located under the port berth.  Full standing headroom throughout the interior.

Storage behind the galley as well as dedicated shelves for glasses and mugs on the bulkhead.

Heads compartment forward on the starboard side with a Jabsco sea toilet which pumps directly overboard. 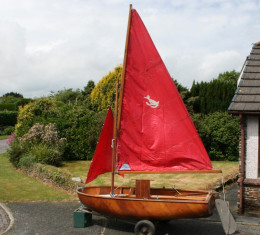 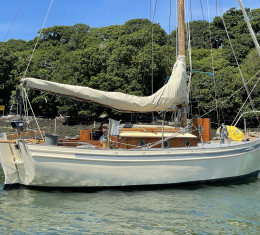 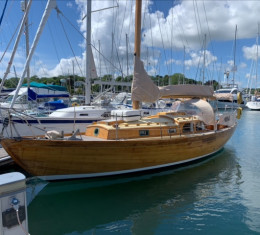 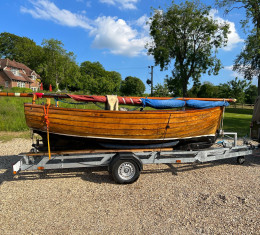 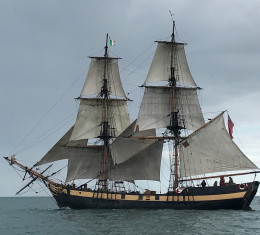 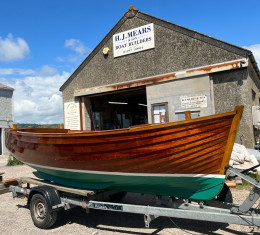 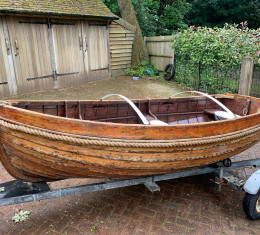 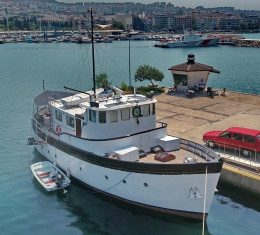 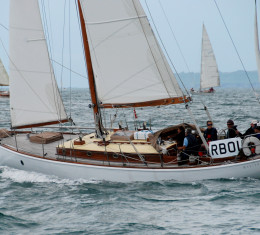 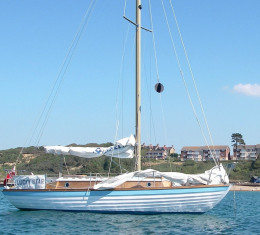 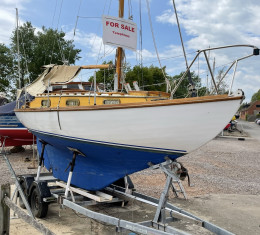