The design is typical of Alan Buchanan’s work at the time and similar to the successful East Anglian design.

Sold by Wooden Ships to current owner in 2013 and to the previous lady owner who kept her for 30 years since purchase in 1983,  lived on board and sailed the yacht in the Solent area.

The yard has now seized the yacht for non-payment of storage dues, offering it for sale for a nominal figure.

The attached photos show the yacht as she was in 2013 with 3 more photos at the end showing her as she is now.

The rig including mast spars, sails and rigging is missing. The rudder is not in situ and must be considered missing.

The condition of the yacht must be checked prior to taking ownership and the yacht is definitely sold as seen.

However she was always a pretty little yacht, typical Buchanan of her time, good builder and a fine little sea-boat. In the right hands she will certainly sail again.

The hull has a full keel with long external ballast keel, a slightly cut-away fore foot, good free-board with a very sweet sheer, an over-hanging bow and a raked transom stern with the rudder hung on the transom.

The construction is unusually robust for a yacht of this size. 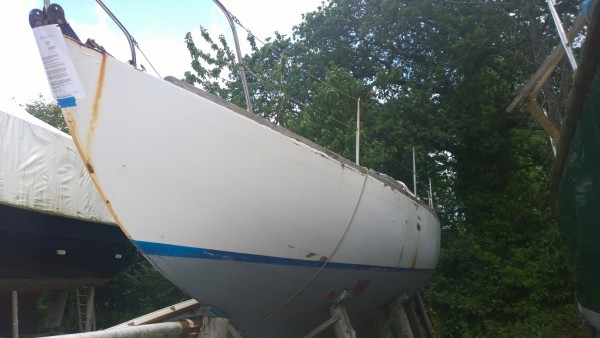 Planked in larch below the wl, mahogany above, all caulked and payed in the traditional way.

The planking is fastened to the steam bent oak timbers with copper nails and roves. Plank butts to wooden butt straps.

A 5” beam shelf all round is strengthened by a 6” clamp over most of the length of the hull. (The clamp is an additional plank internally below the beam shelf and resists any tendency for the hull to pull up in way of over-tightened rigging and of course any size-ways pressure or impact.)

A 5” sided stringer runs the full length of the hull at the turn of the bilge.

The deck is reinforced in way of the mast by a pair of massive oak knees under the side deck + a pair of knees each side on the coamings.

The mast step on the coach-roof deck supported below by 3 very heavy deck beams with a fore and aft oak beam spanning them each side supported in turn on oak compression posts. This hull is not going to move!

The deck is laid in T&G pine, originally canvas sheathed as was traditional. Deck canvas replaced by glass cloth and resin in 1983, painted light blue. An uncluttered and easily maintained deck.

Mahogany toe rail all round the deck edge.

Long low coach-roof dropping nicely down to meet the sheer, raised to a dog-house aft with two windows each side. Mahogany coamings in need of varnishing.

The varnished oak deck beams below are immensely robust for the size of the boat and support the mast step on the roof.

Fore hatch on the front end of the coach-roof needs revarnishing.

Self-draining cock-pit with white painted ply sides to the well. Locker door in the well to the lazarette under the aft deck.

Fixed stabd seat over the ¼ berth.

Sliding hatch and louvered wash-boards to the cabin entrance, all mahogany and in need of varnish.

Originally fitted with a fractional bermudian sloop rig on varnished spruce mast stepped in a galvanised shoe on the coach-roof deck. This was a well-supported mast with single spreaders and jumper struts above.

Single lowers, cap shrouds to the jumper struts and diamonds round the jumpers to the cap.

She had a varnished spruce roller reefing boom sheets with modern blocks to a horse on the aft deck, jammer on the lower block.

Pair of original bottom action tufnol winches on galvanised pedestals on the cock-pit coamings take the headsail sheets. Associated cleats on the coamings.

Halyards on straight pull and a single whip.

Chain well forward, Sampson post through from the deck.

Part bulkhead with opening in way of the deck compression posts to the saloon cabin with port and stbd settee berths.

Varnished engine box between with steps to cock-pit.
electrical switch board under the bridge deck over the engine box.

Top loading locker lid in the back corner. Locker under the surface.

6’ head-room at the galley under the entrance hatch.

In her 30 years ownership, the previous lady owner has cherished the yacht and was rewarded by some great sailing. She has had good work done over the years, notably by The Elephant Boatyard in 1983 when she spent nearly £4000 on the deck, the rudder and other areas and again in 1990 when the coach-roof deck was replaced and other work.

The next owner from 2013 has disappeared abandoning the yacht with no rig as far as is known. She has stood out of the water fir a number of years now but appears superficially at least not to have suffered as much as one might suspect.

The yard has now taken legal possession of the yacht and is offered for sale for a nominal price with clear title.