A historic french sailing gaff cutter, Angele Aline was built in Fecamp, France in 1921 at the yard of M. Argentin, the Societe de Construction Navale de Fecamp, foreman builder Leonce Bennay, as a sailing fishing boat, known locally as Dundee, a French distortion of English Dandy, the new gaff rig developed in the last years of the 19th century to replace the ubiquitous lug rig.

She was built for the fishing family of Jules Talleux of Gravelines and launched 5th November 1921 No 261 with the name Jules Talleaux.

She was launched fully rigged and with a 40hp Otto Deutz engine which  was more likely used to run the net capstan than drive the ship.

Like many of her sisters, she fished for herring off the Scottish coast in the summer months and round into the Atlantic to fish for cod  in the winter.

There are only a handful of these vessels left afloat, the best known being the Biche owned and restored by the Maritime Museum in Douarnenez, Britanny.

She was requisitioned by the French Navy  in WW2, took part in the evacuation of our troops from the beaches of Dunkirk and has the coveted badge of the Dunkirk Little Ships Club.

She was scuttled twice during the war and raised again to carry on fishing after the war with severaq documented owners until sale to Dutch private ownership in 1963.

The Dutch owner re-rigged her as a ketch and fitted out the interior for family sailing. After 20 years in Dutch ownership she came to UK and was sold by Wooden Ships to Gareth Wright from UK.

In Gareth’s ownership she took part in the 1982 Tall Ships Race to Lisbon, coming 1st in Class.

In 1983 she took part in the Tall Ships Race, Cherbourg to the Orkneys and back to the Channel Islands.

In 1984 she took part in the Tall Ships Race, St Malo, Canaries, Bermuda, Halifax and back to Liverpool.

Sold by Wooden Ships in autumn 1984 to George and Meriel Thurstan who moved aboard and spent several seasons as a charter yacht in Turkey before Wooden Ships sold her in the autumn of 1991 to an English surgeon.

In the course of the next few years she had some extensive work culminating in a major job in 2005 including installation of a pair of wing engines replacing the single centre-line engine, all new domestic services and replacement of  most of the deck.

With the boat back in service she was sold to the present owner in 2007 for use in charity promotional work.

In his ownership she has had yet further major work to address the last of her age-related issues and bring her up to date for modern cruising and to comply with the MCA Code of Practice rules to carry 12 passengers and 2 crew for sail training work.

Now finally in commission and extensively rebuilt, the next lucky owner will profit from the hard work, heart-ache and investment of the past owners.

The unique advantage of this vessel is her extensive accommodation and deck space within her length making her potentially a very viable sail training ship or charter yacht and capable of partaking in all the exciting traditional sailing events around Europe. 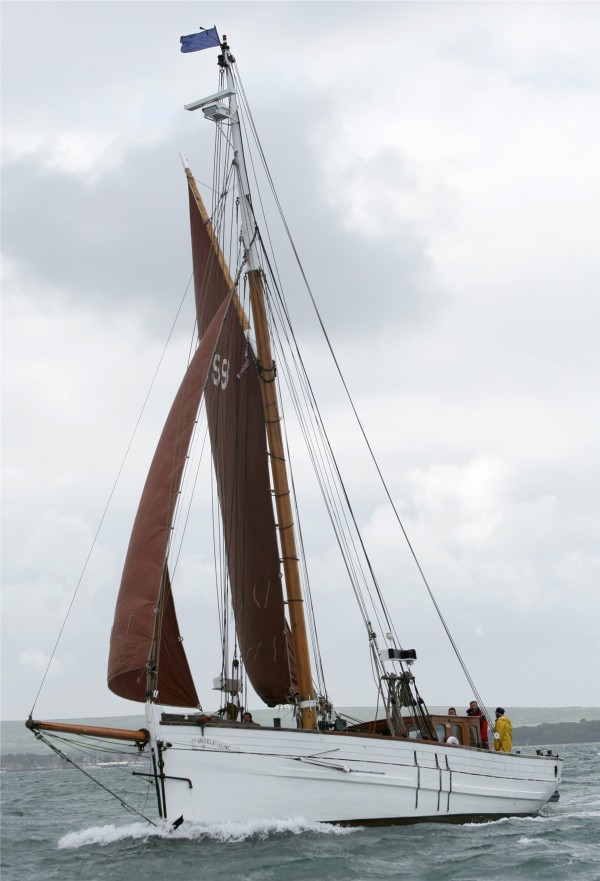 High bulwarks all round the deck ensure safety on board.

Originally planked in oak, her extensive replacement planking above and below the water-line has been done in larch.

Bulwarks carried on oak stanchions, all new in recent years.

The deck is laid in 2 thicknesses of 1” ply and epoxy glass sheathed to give a totally water-tight, hard-wearing deck which adds enormously to the strength of the vessel.

The vessel was originally ballasted with concrete as was customary with fishing boats. In the 2005 refit this concrete was removed the structure checked and 6 tons of concrete replaced.

In the 2005 refit the original oak rudder was replaced with a hollow, oil filled steel plate rudder carried in plastic bearings and operated by a traditional wheel with hydraulic drive. Seals and ram mounts replaced recently.

Pilot house and cabin roof built in teak framing with teak panels and decked in teak, the whole finished bright in Coelan.

Traditional sky-light on the cabin trunking.

In the 2005 refit all skin fittings were replaced and fitted with modern lever ball and bronze cone valves.

Mast hoops to the mainsail.

Galvanised wire standing rigging set up to dead-eyes and lanyards on chains to external chain plates.

Cavel bars with belay pins each side in way of the rigging.

Aquadrive anti-vibration units on the shafts

Rope cutters on the shafts.

2 heads, one with shower, one ensuite with the aft cabin.

Hot water to galley and shower, calorifier heated by the Morse stove or engine cooling water or 240v immersion heater.

Numerous fire extinguishers – next service due May 2013