Designed by Maurice Griffiths and built by Purbrook-Rossitors of Christchurch in 1972.  Only 3 owners since she was launched.

In his book, Little Ships and Shoal Waters, Maurice Griffiths describes the evolution of the Good Hope design, produced immediately after his retirement as editor of Yachting Monthly to the very specific requirements of a sailing friend.

Maurice Griffiths was a great moving force in post war yachting. An East Coast man, as editor of Yachting Monthly for many years he was the inspiration to so many people who took up yachting at that time. Money was short, facilities were basic but the old yards were still there and transport to the coast was becoming easier.  In his designs, he took much of his inspiration from the East Coast working boats built for those shoal waters but was also influenced by some American designs, especially from the Chesapeake Bay area.  He is best known for his smaller shoal draft designs which appealed to the growing market of impecunious new yachtsmen at the time, but he also drew some larger and far more capable boats.

The yachts were very well received and proved to be good sea boats so he went on to modify the design for ferro-cement construction which proved popular in South Africa and Australia.

This example of the Good Hope design was extended in build by 30” to give a slightly larger aft cabin and space for a second heads compartment, which arguably makes her a slightly more elegant yacht.

The design features a long straight keel which carries the external ballast keel right up to underneath the mast with a slightly cut-away fore foot up to the stem and an overhanging transom stern.

Full, round bilge gives plenty of hull stability without excessive draft as well as a good width of cabin sole.  The rudder is hung on the stern post under the counter over-hang.

On deck, she has a centre cock-pit which allows a separate aft cabin under its own aft coach-roof. The forward coach-roof reaches from the cock-pit to forward of the main mast leaving generous side decks and a clear foredeck. 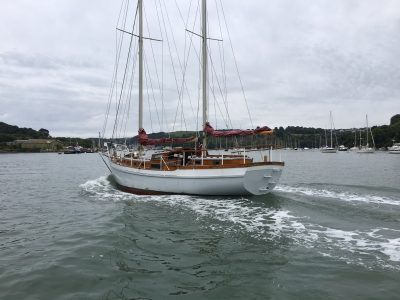 Grown oak floors across the centreline fastened through with large copper rivets.

Heavy low bulwark all round on wooden stanchions and a varnished capping rail.  Guard wires on stanchions above.

Heavy duty deck fittings, fairleads and cleats give her the feel of a strong capable yacht.

Roller furling staysail and twin forestays to the bowsprit end for twin hanked on jibs.

2 pairs of bronze sheet winches on the cockpit coamings.

Full set of sails including as new mainsail and recent staysail and jib.

2 x 120 litre stainless fuel tanks either side of the engine with balancing pipes and water separator filters.

2 stainless steel water tanks, total of 42 gallons, located either side of the engine.

Very spacious accommodation with an aft sleeping cabin, main saloon and forward cabin.  6’4″ headroom through the saloon and 6′ in the aft cabin.  Very clean and comfortable interior space for extended live aboard.

Starboard side companion hatch into the aft cabin from the cockpit with a heads compartment on the port side.  New Jabsco manual sea toilet with pull out hand basin.

Double berth on the port side nearly 7′ long.  To starboard are a pair of hanging lockers and storage cupboards in nice varnished mahogany joinery.  Massive storage space aft under the deck.

Centreline hatch from the cockpit into the main saloon with a galley to port and large Admiralty chart desk to starboard.  Chart desk has customised drawers and storage below it for charts, implements and other gear.

Galley has a two burner gas stove with oven and grill on gimbals, single stainless sink with manually pumped fresh water and ample storage space in lockers and shelves.

Half height bulkheads with vertical grab rails separate off the main saloon with a single settee berth either side, dropleaf varnished saloon table and a very generous pilot berth to starboard under the side deck.

Cast iron solid fuel cabin heater at the forward end of the saloon.

Starboard side passageway going forward with hanging lockers outboard and a large heads compartment on the starboard side.  Jabsco manual sea toilet with fixed hand basin and storage lockers.

Forward cabin has previously been used for sail stowage however there are 2 single V-berths of a good size with storage below, ladder to the forehatch above and chain locker in the bows.