Now reduced to sell before summer due to the owner moving back to the US.

Atkin was the designer of Sir Robin Knox Johnston’s famous Suhali, known as the Eric Class, in which he became the first man to complete a non-stop solo circumnavigation from 1965 to 1967.  The Vilisar is very similar to the Eric but with slightly larger dimensions to increase the internal volume.

The design was inspired by the sailing lifeboats of Norway, of course drawn by the famous Colin Archer, and because of this she is a terrific sea boat and has been proved so by many owners throughout the years.  Her long keel, rounded stem and canoe stern with a stern post hung curved rudder are all hallmarks of the Norwegian designer.  Although not a race boat, she is no slouch with a steady breeze, and has won several classic regattas in a previous ownership.

Her voyaging record is as distinguished as any boat with at least two circumnavigations under her keel and a trans-Atlantic crossing, she has proven herself beyond doubt to be a competent and safe blue water cruising yacht.

She first arrived in the UK from America in 1980.  The English owner settled in Falmouth with his family and set up a joinery shop before he asked Wooden Ships to find a new owner for the boat.  They had spent the previous few years cruising extensively in warm waters and only the children’s education brought them back home.

She was featured on the cover of Classic Boat magazine in 1990, a copy of which is available along with a 2013 and 2016 survey.

We recently had the pleasure of sailing her from Falmouth to Dartmouth and we were pleasantly surprised at how easy she was to sail, how fast she was and how comfortable she was to be aboard. 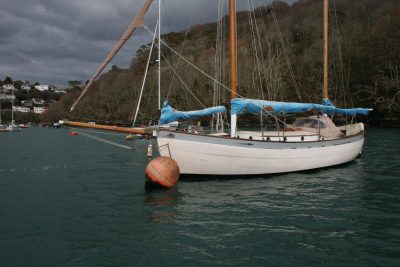 Planked in 1.25″ Douglas Fir fastened with stainless steel screws to laminated frames.  Major refit 1998 – 2000 where she was totally re-framed and re-fastened.

Hull sheathed externally with 3 layers of epoxy glass cloth above the waterline, 4 layers below.

Steel strap floors with steel floor bolts, all new in 2000.

Self draining cockpit newly built in 2006 with a bridge deck  Deep lockers to port.

Ketch rig with a gaff main and bermudan mizzen.

Large sail wardrobe including storm sails and off wind sails.

Gearbox reconditioned in 2011.  Propellor and cutlass bearing new in 2011

6 berths in total including a quarter berth, double and a single in the saloon and 2 singles in the fore cabin.

Chart desk to starboard with the quarter berth under the cockpit thwarts.

Centreline drop leaf saloon table with a single settee berth to starboard and a U shape settee to port which opens out into a double.

Doorway on starboard side into the forecabin with twin V-berths and stowage space.