The 24’  Mylne Tay Class sloop was designed by the great Alfred Mylne as a day racer for the Royal Tay Yacht Club in Perth, Scotland. 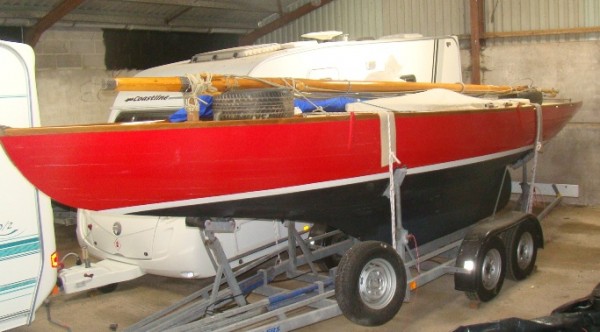 It is believed that 3 were built. This is the only known survivor.

We think this one was built in 1898 though a pencilled note on the line drawings can be deciphered “Sails by McKenzie, 1902”.

The yacht was discovered in a barn on the West Coast of Scotland by Wooden Ships in 2000, part of a collection of small boats in a grand house and sold in 2001 to the present owner.

The yacht was complete, very largely original, had had no visible restoration but had been stored ashore on a steel cradle for some years and appeared to have suffered very little apart from being dry.

She was first towed south on a road trailer to the owner’s Hampshire home. Further research revealed that the most suitable man to refit her was John Hill, boat builder in Glasgow so she was towed back to Glasgow and left with him.

12 years later she emerged as a very sweetly restored yacht, ready to be launched and sailed.  She has not yet been launched.

The refit was extensively photographed and these photos will be supplied to the new owner.

The original plans are still held by the Mylne Archive, Limekilns, Fife, Scotland.

The hull is believed to be yellow pine, carvel planked with steam bent oak timbers all fastened with copper nails and roves.

Timber floors on every 3rd  frame, the floor arms carried well up the sides of the hull.

Gunter rig on a varnished spruce mast which can lie on the deck within the length of the boat.

The mast steps through the deck onto the keel.

The yard is in solid varnished pine and still has the original oak jaws.

All new stainless steel wire rigging with swaged terminals. Soft eyes round thumb cleats at the top of the mast.

Single stay each side to external bronze chain plates.

Bar main sheet horse across the aft deck. Double-tailed through blocks on the deck each side.

Headsail sheets on single whip to cleats on the coamings.

In the rebuild, the stem was replaced entirely from stemhead to keel.

Several new floors were fitted. The new mid-ships floors thought to be laminated iroko, the forward floors are solid oak.

The original canvas-covered pine board deck over-laid with ¼” marine ply, sheathed with epoxy/glass scrim and painted.

New toe rail all round in varnished mahogany.

The hull was lifted off the keel, the bolts replaced and the keel rebedded.

The cock-pit was rebuilt with new coamings, seats and sole boards.

A new bronze stemhead fitting was made and fitted with a single chain roller and fore stay attachment point.

The mast was stripped and revarnished.

New mast fittings were made in bronze

The boom was stripped and revarnished.

The yard is fitted with the original grown oak forks, now leathered.

New sails – mainsail and jib, have never been set.

Manual bilge pump under the stbd side deck.