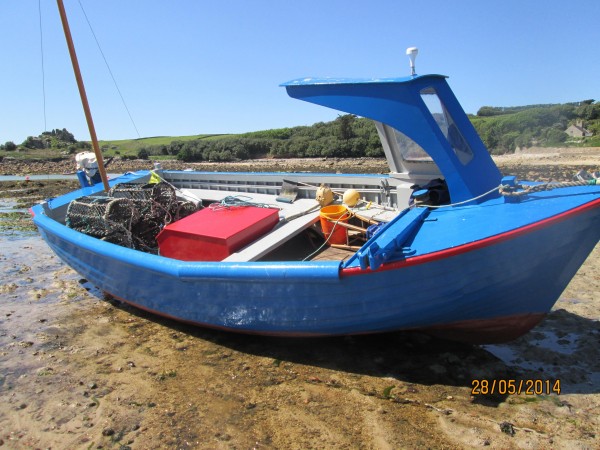 Midships thwart with engine box aft of it.

Seating down port side forward and aft of the midships thwart. Stbd side seating removed.

Engine box fitted at same time as the new engine.

Rope cutter and Elasto muffler on the exhaust fitted 2010.

Binnacle compass in a custom built box on the fore deck.

2001 Spencer Carter hydraulic winch belt driven off the front of the engine running the capstan on the fore deck.

Custom built yard trailer with tractor tow bar. In the winter she sits on the trailer, blocked up to take weight off the tyres.

Present ownership since 1975, road transported to Penzance and shipped to Scilly on the Scillionan.

Believed to have been built for the previous owner and used as a passenger ferry which might explain the under-land protection down the stbd side if she always came alongside stbd to.

The late owner was a well-known marine engineer in St Mary’s, Isles of Scilly. He did the marine engineering on his boat with any wood work carried out by local boat builders.

Fitted out and used in present ownership as a pleasure fishing boat around the Scillies and fitted with a hydraulic winch in 2001 to lift the occasional pot.