Apply now
Enquire about this boat Apply for finance

Built in 1909 by Bowdens of Porthleven as a Bristol Channel Pilot Cutter, one of the smaller boats in the fleet but no less seaworthy than her bigger sisters.  She was launched from the same yard in the same year as Olga, another well know Pilot Cutter.

Her history is well documented with many long distance adventures, in the present long ownership she has sailed numerous times to northern Norway, Svalbard and Greenland and has proven herself with many voyages through incredibly rough weather.

She had a thorough survey in 2017 after sustaining damage to her mast.  The result of this was a new mast fitted in 2018 plus a lot of work to the hull and decks to get her into top shape.  She is now ready to sail off on another long distance adventure if required and her very experienced owner has absolute confidence in the boat, her condition and her capability at sea.

A smaller Pilot Cutter like this has many attractions, not least how easy she is to handle compared to the larger boats.  Her rig is that much smaller so there is less weight and power to control therefore requiring a smaller crew to sail her safely.  This will be a huge attraction to many buyers as the difficulty of getting crew is something which haunts many boat owners.  Her interior still has up to 6 berths with good headroom and enough storage space for supplies and equipment on long passages.

A pedigree pilot cutter with a long rich history which is in good sound condition and ready to sail.  2017 survey available along with a list of work carried out recently. 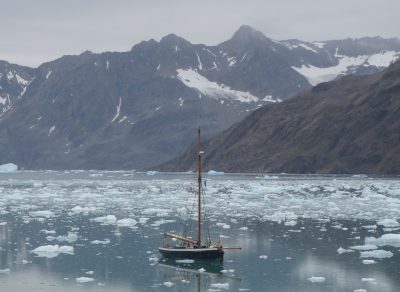 Grown oak floors across the centreline.

Straight laid solid Douglas Fir deck caulked and payed in the traditional manner.  Much of the deck has been professionally renewed in 2018.  Bulwark all round on stanchions mounted through the coverboard.

The large cockpit is deep and safe with thwarts either side giving access to deep lockers.  Tiller steering with a transom hung rudder.  Not the traditional small Pilot Cutter cockpit but it is far more practical for offshore voyages as the crew can shelter safely in it without interfering with the helm.

All halyards and sheets on tackles, a well planned rig that has been improved over many long voyages to make it as simple and strong as possible.

Mainsail, staysail and 2 jibs all from 2014 by Patrick Selman, made from Clipper Canvas.  Topsail and large staysail from 2000.

Overhaul on the engine in 2018, All engine electrics replaced including control panel and loom and gearbox rebuilt by manufacturer.

6/7 berths including a large double with over 6′ headroom in the saloon.

Steps down with a galley to starboard and chart desk to port.  Large quarter berth to port.

Cosy saloon with nice panelled joinery.  Settee berth either side and a central saloon table.

Diesel fired cabin heater plus a hot air heating system off the engine.

Forward cabin with a large double to starboard and stowage beneath.  single berth to port with a pipe cot above.

Heads in the fore peak with a manual sea toilet which discharges directly overboard.  Lots of storage space in the forepeak.