designed by Alan Buchanan as a development to his famous and very successful race yacht Vashti, this boat, originally launched as Vae Victus was designed to be easier to handle by a small crew while still keeping the performance and seaworthiness of Vashti.  She is a little narrower in the beam, with slightly deeper draft and a more compact rig, resulting in a stunning yacht that is easily driven and handled while still being fantastically fast.

Built in 1961 by E. W. Sutton, Essex, she had a successful first season on the race circuit, winning the Burnham Town Cup and going on to be twice champion of the East Anglia Offshore Racing Association’s cup series.  She was notably featured in the Yachting World Annual of 1962.

A sweet sheer line as is typical of Buchanan boats with a beautiful counter, a nice touch of tumblehome and a low coachroof make this a very eye catching yacht.

Planked in teak below the waterline, mahogany above, fastened with copper nails and roves to steam bent Canadian Rock Elm timbers on an oak backbone with oak stem and stern post.

Keel dropped off in 2010, keel bolts checked and found to be sound.  Keel rebedded

Teak deck over a 20mm marine plywood subdeck on oak deck beams. Yacht laid 10mm teak glued to the plywood with Epoxy and payed with Sikaflex, joggled to a king plank with a high scrubbed teak toe rail and capping rail.

Varnished teak coachroof coamings extending aft to create the cockpit coamings with cockpit thwarts at deck level.  4 bronze framed fixed portholes each side.  Coachroof in plywood on laminated pine beams to give the nice camber.  Sheathed and finished in blue deck paint.  Varnished handrails down each side,  varnished teak forehatch with Perspex centre to allow light into the forepeak.

All bronze deck fittings with a small Sampson post on the fore and aft decks to secure mooring warps.  Stainless steel stem head fitting with twin bow rollers.  Installed pipework at the stem head fitting to wash the chain as it is hauled in.  ‘Quick’ 12volt vertical axis anchor winch just aft of the Sampson post.

Long self draining cockpit with scrubbed teak cockpit seats gives plenty of space for a helmsman and crew to work.  Blue canvas sprayhood fixed to the coachroof extends aft to give shelter to the companionway and the cockpit.  Tiller steering on rudder stock that emerges through the aft cockpit thwart infront of the aft coaming.  Large sealed locker lids in the cockpit sole give access to the stern gear and storage for mooring warps.  Compass to starboard of entrance hatch with Tack Tick & Stowe instruments on a panel above the companionway. 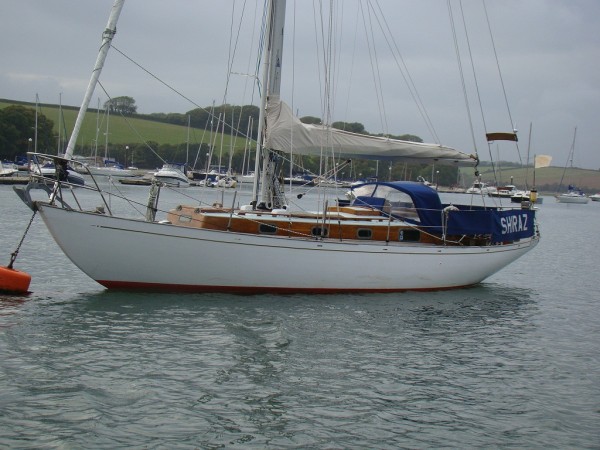 This is a largely original interior layout with a very open feeling to get the most from the space.  Finished in white panelling with varnished trim with scrubbed teak sole boards and blue bunk cushions.  Webasto diesel hot air cabin heater.  Handrails at head height around the inside of the coamings plus vertical handholds on the bulkheads as would be expected of any good sea boat.

Entrance through the sliding hatch onto the engine box.  Locker behind the steps under the bridge deck with battery switches and stowage.  Port and starboard quarter berths, open right through to the aft end.  Comfortable berths that allow full access and ventilation to the aft end.

Galley to starboard with a gimballed Plastimo Neptune 2 burner and grill gas stove.

Single stainless steel sink with hand pumped fresh water from approximately a 70l tank under the cabin sole.  Plenty of storage space with sliding doors to lockers behind the galley and lockers under the stove.

Chart desk to port just forward of the quarter berth with chart drawer and open front locker under.  Fully integrated electronics at the chart desk.

Port and starboard setee berths.  Ample stowage under and behind both berths with lockers and shelving above under the deck head.  Trotter box at forrad end with joinery over providing a flat work surface and a cutlery drawer.  Shelving above on the bulkhead.

Forward to the forepeak, currently only used for stowage of sails and loose gear.  Could be converted with v-berths to create 2 extra bunks which has not been necessary in the current ownership.

The layout, design and finish of the interior makes the most of the space available and avoids the cramped feeling often found in the narrow gutted boats typical of this era.

This is a superb pedigree yacht with a rich and successful racing history as well as a proven track record cruising extensively around UK, France and Spain in the last13 years.  She has been maintained to the highest standards with all the serious structural issues that can affect these yachts being addressed in recent years.  We now have a boat that is absolutely ready to sail away and will be equally at home campaigning at classic regattas or cruising with the family.