Dr Thomas Harrison Butler was one of the great amateur yacht designers of the first half of the 20th century. An ophthalmic surgeon, he and others like him including some great names like Claud Worth and Albert Strange were instrumental in developing yacht design.

Harrison Butler’s great interest was in hull balance when heeled and on the basis of Admiral Turner’s metecentric theories he drew some fine yachts which perform exceptionally well and avoid that great devil of the earlier Victorian yacht designs, a heavy helm.

The point of the metacentric theory was that the buoyancy of a hull changes as she heels when  different surface areas are immersed. The result is that a yacht which might sail in a straight line when upright, when heeled will either climb up to windward (weather helm) or fall off (lee helm) as a result of the changed buoyancy forward and aft of the center of balance. The idea is to design a hull with the right heeled bouyancy so that she still sails in a straight line when heeled to a gust and this is where HB excelled.

The Askadil was one of HB’s larger designs and several yachts are known to have been built to this design.

Askadil is designed to the metacentric principal and is therefore a typical example of a well-balanced HB design.

Built by K. Newton, Cley next the Sea, Norfolk in 1939. Newton had a small boatyard and is probably best known for building the Uffa Fox Blakeney One sailing dinghies.

The yacht was authenticated as a true HB by the designer’s daughter Mrs Joan Jardine-Brown and is recognised by the HB Association.

After some extensive work following a long period of under-cover lay-up the yacht is now close to recommissioning. A new owner will have the pleasure of fitting some deck gear associated with the rig, stepping the mast, bending on the sails and the huge satisfaction of relaunching her and sailing for the first time in over 20 years. 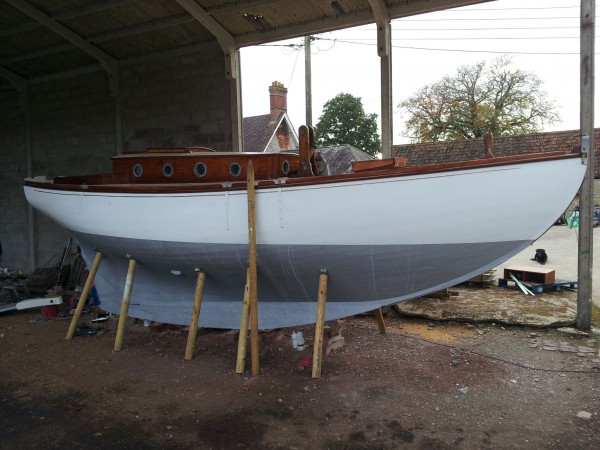 Planked in pitch-pine, caulked and payed and finished in white enamel.

All copper fastened to steam bent oak timbers on an oak back-bone.

The deck is traditionally laid as was done in those days in t&g pine boards and covered with canvas. The canvas sheathing has been replaced more recently with grp sheathing to give a tough, maintenance-free and hard wearing, water-tight deck.

Classic Harrison Butler coach-roof, quite narrow, well cambered deck with varnished teak coamings and bronze port holes. The cock-pit coamings swell out from the after end of the coach-roof in the most lovely way to give a small, deep, well-sheltered  and safe cock-pit.

The coach-roof deck is laid like the main deck.

New hardwood toe rails all round .

Hull burnt off to bare wood.

All hull seams repayed with red lead putty as traditional.

Completion of rewire prior to sale.

Bermudian cutter rig sets 485sq’ on a varnished mast mounted in a wooden tabernacle on the deck in front of the coach-roof.

The mast was professionally repaired with a new lower half scarphed to the existing.

One of the joys of this yacht is her largely original interior joinery and good standing head-room.

Companionway from deck to the galley lobby with a cooker space to starboard and stainless steel  sink to port fitted with cold water via a manual pump, drains overboard through a sea-cock bewlow.

Bulkhead to the saloon cabin.

Saloon cabin with port and stbd settee berths all fitted out in original oak joinery.

Stbd side opening in the fwd bulkhead through to the fore cabin with 2 fold-up pipe cots.

Close to 6’ head-room in the saloon cabin.

Bronze cleats and fairleads. All deck fittings removed during restoration are with the boat.

The early history of the yacht has been lost.

In the early 1950’s she was owned by R.R. Allison of Canterbury and berthed in Dover.

In the late 1950’s she was sold to Hugh Kennard of Court Lodge Maidstone.

1964 sold to Vice-Admiral Dorling and berthed in Porchester

1969 sold to Michael Contsable of London, berthed in Chichester Harbour

1975 sold to Major Terry of West Poynings, Devon berthed in Gosport and later in Woolverstone Marina.

Through the 1990’s the yacht was laid up under cover ashore for repairs and considerable work was carried out by Lathams of Poole before being bought by the present owner in 2012.

The present owner has completed the work in progress and the yacht is now very close to being ready for commissioning.

Stripping and repairing the cabin roof and all deck areas, the whole then covered and        sealed with fibre-glass.

All outside surfaces of the hull have been taken back to bare wood and re-painted.