Hillyard 20 ton bermudan ketch from the famous yard of David Hillyard in Littlehampton.  Hillyards were one of the first yards in the world to mass produce yachts and make the sport more available to the average person.  Although nothing like on the scale of modern yacht builders, Hillyards produced many hundreds of boats in the time they were trading, and although not known for their high performance they were nonetheless extremely solid, well built and safe cruising yachts that were available at a sensible price, opening up yachting to a far greater number of people.

The 20 ton yacht was one of the biggest boats the yard built with the usual canoe stern and a single chine bilge.  This feature made the hulls stiffer under canvas and gave more interior volume which is something the Hillyards were known for.  It is believed the first owner had her built to undertake a circumnavigation and did so.  Although not the fastest boats to sail around the world, they are safe and have proved many times that they are more than capable.  These boats make superb family cruising yachts because of their design and layout giving lots of space split into separate areas.  The forward accommodation, the saloon and the aft accommodation are distinctly separate areas giving people their own space while on board, something very unusual in a boat of this length.  In warmer climes, the cockpit can be used as an extra living space with its hard roof and cockpit cover. 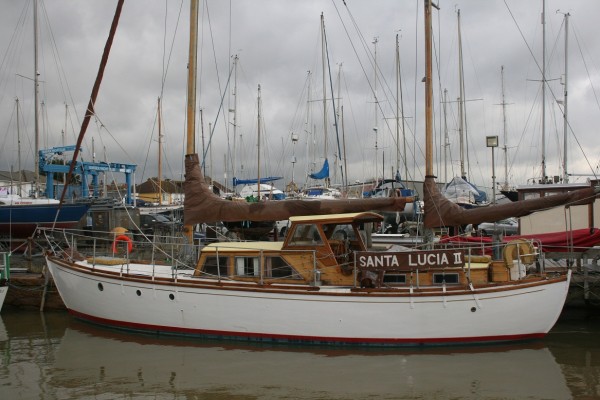 Planked in 1 ¼” Mahogany fastened with copper nails and roves to sawn oak frames with 2 steamed intermediate timbers on an oak backbone.

Solid mahogany coachroof coamings with large aluminium framed windows.  Sheathed plywood coachroof deck with a mahogany roof over the cockpit, added after her build, that is effectively a solid sprayhood.  This is a very practical addition for sailing in the UK as it provides just enough shelter to keep the worst of the elements off the helmsman.

Cockpit is deep and wide giving plenty of space for a crew to move around and a sheltered area where youngsters will struggle to fall out of.  Seating with cushions all round and wheel and cable steering on the centre line.  Entrance hatch offset too starboard.

Usual spacious foredeck that these big Hillyards are known for.  Galvanised steel pulpit with galvanised stanchions and solid galvanised top rail.  Varnished mahogany toe rail set on the stanchion bases which allows plenty of water freeing and reduces the number of screw holes put through the sheathing which can be source of trouble.

Spacious foredeck back to galvanised steel tabernacle in front of the coachroof.  Clear side decks with high stanchions.  Small aft deck owing to the aft coachroof, with large varnished mooring cleats, galvanised fairleads and galvanised stern post fitting to take the mizzen sheet.

Mizzen has single spreaders with single cap shroud and lowers.

Pair of Lewmar winches at the mast for halyards and reefing.

Light and spacious deck saloon with steps down from the cockpit through the companionway offset to starboard.  Varnished mahogany joinery with white painted bulkheads and carpeted cabin sole.

U-shaped settee to port with a centreline drop leaf table.  Large storage lockers behind and under the settee.  Varnished mahogany cupboards to starboard under the deck head with drop down chart table at the forward end.

Starboard side passage to aft cabin with hanging lockers on the outboard side and engine access hatch on the inboard side.

2 single berths in the aft cabin with a dressing table and heads compartment.  Heads is installed and working but the interior fit out of the heads compartment is not finished.  Plenty of storage under the berths.  Hatch at the aft end of berths to access the steering quadrant.

Centreline steps down at the forward end of deck saloon with a galley to port and heads to starboard.  Galley with 3 burner gimballed gas cooker with grill and oven.  Double stainless steel sink unit drains overboard with pressurised hot and cold water.  Lockers on the forward bulkhead and below the sink.

Forepeak currently laid out for storage but could be converted to accommodate V-berths if required.

4 man liferaft (out of date)