The McGruer Romella class was designed by McGruers and built by Harry Feltham of Portsmouth in 1953. Very typical McGruer lines with an elegant underwater shape, nice sheer line and a reasonably high but nicely shaped coachroof.  The design is known as a Romella Class and she was the first of about 7 boats built by Feltham to this design.

She has been in the previous ownership since 1992 and was sailed extensively after a major refit which took 4 years with the work being completed in 1996.  She was laid up ashore and undercover in 2003 until 2013 when with the current owner more updating work was carried out with a replacement of the navigation equipment amongst other bits.  There was also some more structural work completed at this time including replacement of the keel bolts.  She is now in fine condition and comes with a very complete inventory and good equipment. 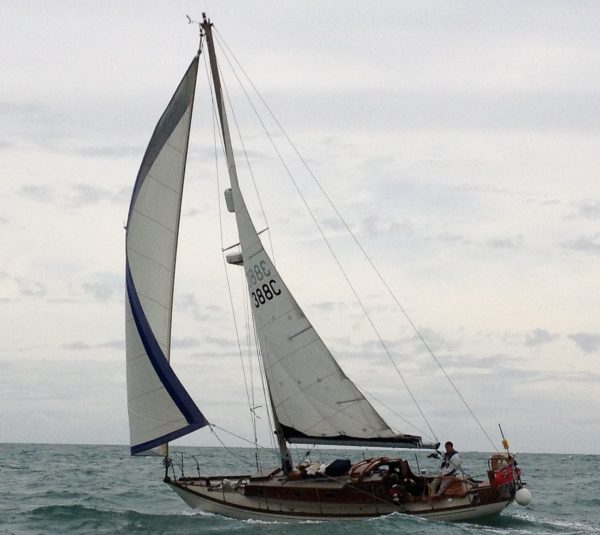 Planked in mahogany all fastened with bronze screws to steamed oak timbers.  Hood ends at the bow refastened in 2013.

The entire hull was stripped to bare wood, re-caulked and then painted again in present ownership between 2013 and now.

Self draining cockpit with varnished teak thwarts and a small bridge deck in the companionway.  Coaming mounted sheet winches on pedestals with cleats on the outboard side of the coamings.  Tiller steering directly onto the rudder stock on the aft deck.

Stainless steel standing rigging new in 1996, but stored inside for 10 years without use.  stainless rigging screws new in 2014 with new terminals to internal galvanised steel chainplates.

Mainsail by Wilkinson, brand new in 2015.

60l of fuel capacity in two plastic tanks with a transfer pump plus 20l plastic can in lazarette with separate transfer pump.

Total of 50l of water in two flexi tanks located under the quarter berths.

3 x 12v batteries for engine starting and domestic use.  Charge from engine alternator or through a 240v charger when connected to shore power.  Complete shore power system fitted 2014.

4 berths with a quarter berth each side and 2 saloon settee berths.

Steps down into the saloon over the engine box.  Galley to port and chart desk to starboard.  6’4″ headroom aft.

Heads compartment to port forward of the saloon.  Lavac sea-toilet which discharges directly overboard.  Porcelain hand basin on the bulkhead.