Enquire about Sparkman and Stephens Sloop

Wooden Ships Comments on this Sparkman and Stephens sloop

Designed by Sparkman and Stephens and built by Moodys in 1965, Josephine VII was the last of a number of ocean racers built for Mr Cosby Smallpiece, she was built for the One Ton Cup series held in Sweden in 1965.  Considered to be the inspiration for the Swan 36 but with a different keel configuration, she was also Moody’s Boat Show exhibit at the 1966 Earls Court Boat Show.

Built by Moody’s of Bursledon on the Hamble to a very high standard at a time when Moody’s had some of the best craftsmen in the country. Tom Richardson of the Elephant Boatyard on the Hamble worked on her as an apprentice at Moody’s and recalls Olin Stephens insisting that the face of the laminated oak frames was perfectly faired and fayed to the planking. He also recalls the trouble they had fitting the bronze shoe to the underside of the lead keel, an interesting feature of the yacht.

Sold by Wooden Ships on several occasions, the present owner bought her in Mallorca in 2014 and trucked her home for a refit which was undertaken by Tim Gilmore of Birdham Pool.  The main issue was electrolysis and a large number of frame heels had to be replaced along with all new bronze floor bolts.  A full list of the extensive work done and equipment replaced is available.

Although built as a racing yacht, she has been cruised by most recent owners, often single handed proving that she is an easily managed boat, and she completed a double Atlantic crossing with some severe weather proving her to be an admirably sea worthy yacht.   This is a stunning yacht, the epitome of the final period of wooden boat design and construction with her radical underwater shape which rapidly became normal practice.  She represents the very best in pedigree and provenance and will simply be a joy to own. 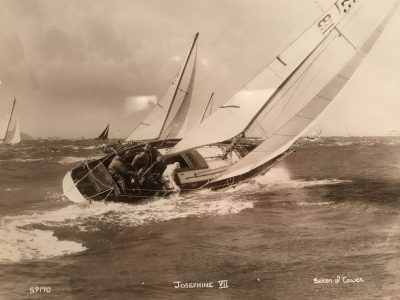 Planked in top quality Honduras Mahogany, splined in the top sides.  Copper fastened to steam bent oak timbers.  The heels of many of the timbers were replaced in the recent refit.

Oak backbone with bronze strap floors across the centreline, removed and refastened in the refit.

Yacht laid teak deck over a marine plywood subdeck.  The deck has been painted externally to protect it from the elements.

Varnished toe rail all round with stainless stanchions.

Large self draining cockpit divided across the middle by the main sheet track with a higher sole at the aft end allowing the helmsman to see over the crew.  All varnished teak coamings and thwarts.

Full set of sails including storm and down wind sails, genoa new in 2014.  Spray hood and mainsail cover new 2014.

5 berths including a quarter berth, 2 settee berths and a double in the forward cabin.  Over 6′ headroom throughout the saloon.

All new upholstery and soft furnishings in 2015.

Steps down over the engine with the galley to port and quarter berth to starboard.

Half bulkheads through to the saloon with a settee berth either side with lockers and shelves behind.  Trotter box at forward end of port berth with storage behind the seat backs.  Dropleaf varnished saloon table and a Taylors paraffin cabin heater on the forward bulkhead.

Starboard side door going forward with the heads compartment to port and hanging locker to starboard.

Heads is a Baby Blake manual sea toilet which discharges directly overboard with a porcelain hand basin that folds out above the heads.

Forward cabin has twin V-berths with a middle insert to create a decent size double berth.  Anchor locker right in the bows.